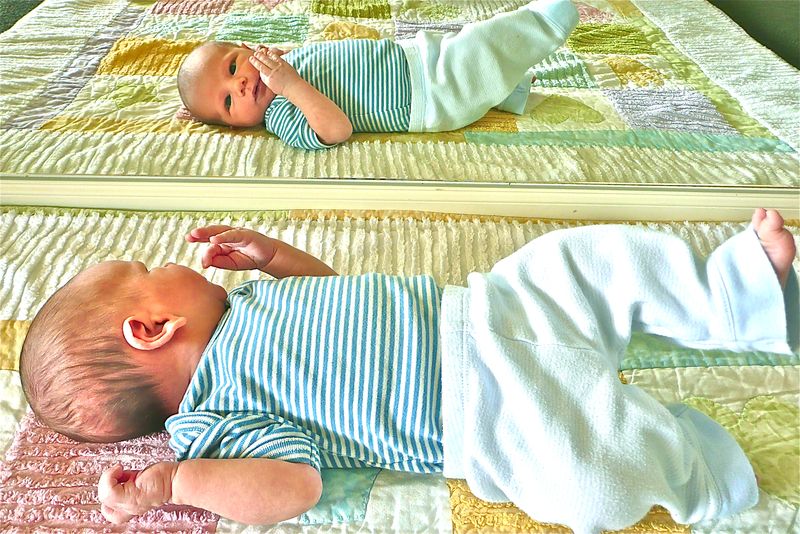 It wasn't until recently that I became aware of Montessori's work regarding infants. Previously I thought Montessori was only about activities for preschoolers and the Montessori Method of education. Certainly this is where a lot of her work is but she also had so much to say about newborn and infant children. In setting up our home environment for our second child I have really tried to follow and understand her work in this area.

In his bedroom we have installed a low wall mirror. Underneath the mirror is a soft blanket to create his movement area. This is where he is starting to spend his limited awake/active time. It is also where he has his tummy time.

Initially I thought about not installing the mirror. It took us a long time to put it up and it was a bit of a hassle. It would have been easier to forget about it. But now I am so glad that we persisted. When I first put him on the blanket and he saw his reflection he was instantly engaged.

The wall mirror provides the chld

The movement area gives the child lots of space for moving around, which a child requires from the start "infants can slither from birth".

Now that we have experienced time spent using the wall mirror and this movement area I can see how beneficial it is and how easy it would have been to overlook it. Certainly it is something I would recommend to anyone setting up an environment for a newborn or infant. It is worth the hassle.

I think as Otis gets older he will spend more time in this movement area. My next step is to put up his mobile and over time introduce some materials for him to use.

Quotations are from Understanding the Human Being - Silvana Quattrocchi Montanaro