Otis on the move 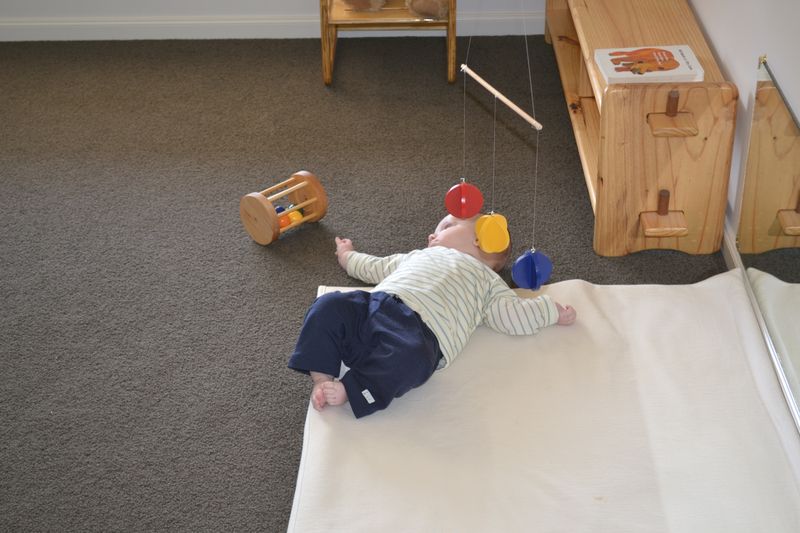 Montessori mentioned that infants can move from birth. Otis never moved much until this week. He has started to do this slither thing where he pushes himself backwards sometimes at an angle.

I wasn't sure if I could believe what I was seeing. On the weekend he slithered across the lounge room floor to reach a hairbrush that Caspar dropped after brushing his hair. This demonstrated to me that his movement was intentional and purposeful. Otis loves having his hair brushed and when he saw his brush on the floor he moved towards it.

Today in his room I left his ball cylinder on the floor and put him in the middle of his mat. Sure enough he moved straight towards it. He actually started crying because he was getting frustrated in his efforts.

I have been asked previously if I am worried about him falling out of his floor bed. At the moment he is slithering backwards meaning he is headed towards the wall not the floor. But my experience with Caspar is that he will find the edge of the bed with his hand or foot and when old enough slither out slowly and cafefully. Dr Montanaro said that you never see a baby lizard fall off a tree and with such a fun analogy I have never forgotten her words.

I am trying to ensure he gets enough tummy time to help him with his crawling and strengthening efforts. Some days I forget. For the time being he is happy enough slithering along - backwards.