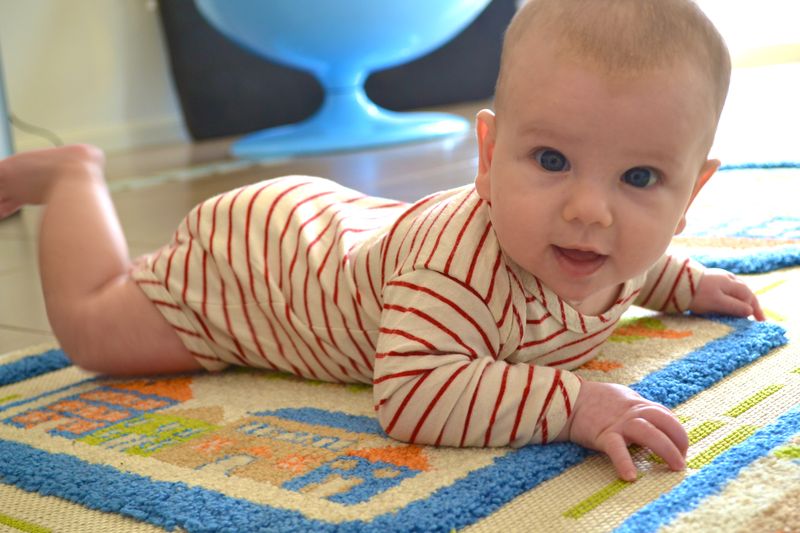 “In the second month of life, the muscles of the neck are brought under control, and the head can be supported without assistance. If the child who is already capable of directing his gaze is also allowed the freedom of observation, this new achievement will produce a notable change in his personal relationship with the environment. Controlling the head is the beginning of his mastering of the environment” - Understanding the Human Being by Silvana Quattrocchi Montanaro.

Well he may be in his third month of life but he has gained enough strength to support his head unaided. This ability to direct his own gaze has changed his relationship with his environment. It has also changed his demeanour. In many ways it is like he is seeing things for the first time. When he is looking around while I am holding him or he is having tummy time, his eyes light up.

I look at photos of my first son Caspar at the same age. Caspar hated tummy time from the start so we were very slow to introduce it. Possibly as a consequence Caspar was slow to crawl and slow to walk. By the end of my pregnancy with Otis I knew my children were very different. Otis was so strong his kicks would hurt and would wake or startle me frequently. I asked other mothers and there was a general consensus that babies like this were also more active and stronger after birth.

Otis was a week old when we started giving him tummy time. He already had the ability to lift his head and turn it from side to side. We started giving him a minute at a time. But he never resisted like Caspar so we quickly increased this time. Giving him something to look at like his reflection in his mirror or a toy in front of him provided something to focus on. Now he has up to fifteen minutes on his tummy, sometimes he will put his head down and rest and other times look around observantly. Otis has also begun to slither forwards. I have no doubt that he will crawl and walk well before Caspar did. Otis is not rolling to flipping yet but he does have the ability to rest his head and when he becomes unsettled I put him on his back or pick him up.