Evolution of a room
When things aren't working out

How do you hang your mobiles?

For our visual mobiles we used a small screw hook directly into the ceiling surface. As the mobiles were light, as Montessori described so they could move in the breeze, this wasn't a problem. However when we begun to use tactile mobiles like the Bell on a Ribbon, Primary Colours Mobile and the Ring on a Ribbon which Otis can grasp, we needed something much stronger.

There are a couple of good videos on the internet on how to install a plant hook and we nearly went with this. However my husband located a stud or ceiling beam above the movement mat and drilled a hole into this and then hand screwed in the hook. Like this. 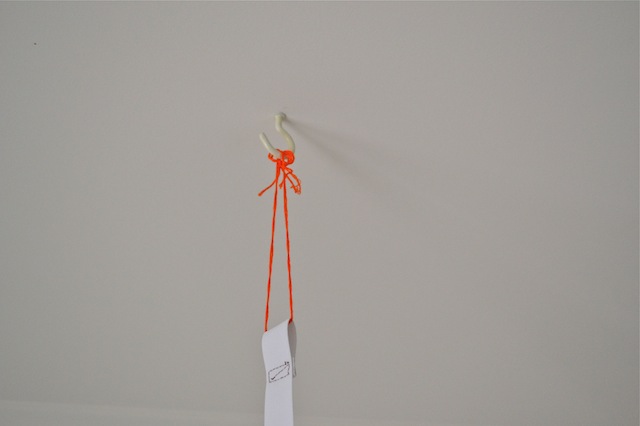 Please take independant advice before drilling into your ceiling. I don't want anyone to copy this and get hurt. To change the mobiles I have used a step ladder to reach and unhook each mobile.

One mistake I made was to hang the mobiles from the hook with cotton thread. Otis did manage to pull one mobile down on himself because the cotton thread wasn't strong enough. Now I use embroidery thread as you can see with the orange thread in the above photo.

Taking advice from Charissa  I put up a temporary hook on the wall (this hook has been put up and then taken down a couple of times). This hook helps to put the mobile to one side if the child isn't using it. Like this. 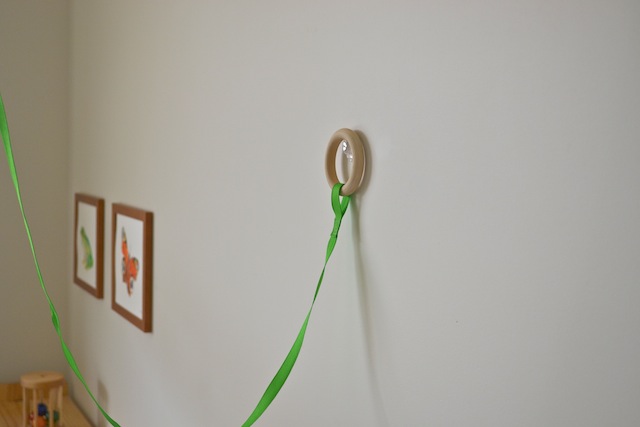 If I need to make the mobile shorter, for example with this ring the mobile is long for use with Otis on his tum and raised for use on his back, I simply tie a few knots in it.

I hope this gives you some ideas or at least explains how we did it.