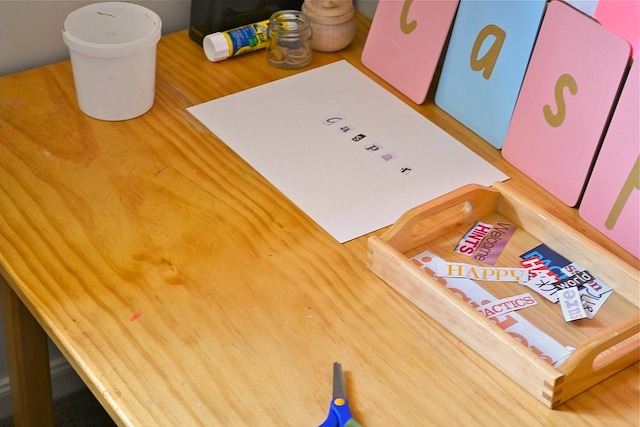 Caspar is four and the Montessori material he uses the most at home are the Sandpaper Letters. Sandpaper Letters are so practical as an at home material because there are so many ways in which you can use them.

Sandpaper Letters are my number one material for preschoolers, they are absolutely worth the effort if you make them yourself or worth the cost if you purchase them.

For Australian (and New Zealand) readers I purchased this set from Wood Puzzles but I think the Montessori Shop has a fantastic range.

I have written previously about how we use Sandpaper Numbers with the Sand Tray and Sandpaper Letters as part of our Letter Treasure Hunt. In the picture above Caspar recently used the letters as a reference to cut out the letters of his name and glue them onto a sheet. This activity allows him to explore the different ways letters are written. I made it easy for him and gave him words already cut out of a magazine.

Most of his work so far has been with the letters of his name. He has also shown an interest in k which sounds like c and o for Otis. It's also really easy to turn a c into an o. 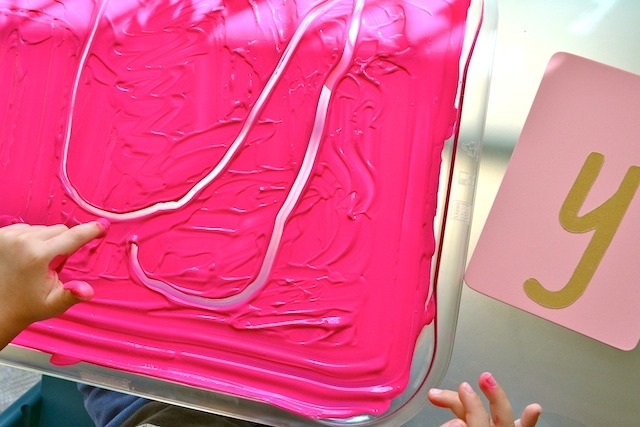 It surprised me that today he wanted to work with y, for his favourite food - yoghurt.

We don't take a formal approach to using any materials at home. I think all parents of preschoolers in some way work with their children on letters and their sounds. It's just that we take a Montessori approach. Which is why I love the book Montessori Read and Write by Lynne Lawrence.

It's written for parents. Not for teachers, not for homeschoolers (although I'm sure they would find it useful) but for everyday parents like us.

If you have Sandpaper Letters (or thinking about it) and don't know where to start this book explains it all clearly. It takes you step by step on how to prepare your child and exactly when to introduce them. It's also a really good guide for playing sound games, which we do a lot.

The book includes templates if you wish to make the letters yourself. Caspar is four and I find the activities in this book for three year olds most relevant to him. An indication that age isn't the best determinant of activities for your child. If Caspar isn't interested it's a good sign the activity isn't the right one for him.

Caspar doesn't have good recall. A letter he knew one day he forgets the next. Unlike many of his younger friends he doesn't know the sounds of all the letters. What is most important to me right now is that he is interested in the letters and that we are fostering a life long love of learning. He's an avid reader though. I'm proud of that.