Mini Piccolini, a new French book and FAQs
FAQs - Sleep from At Home with Montessori 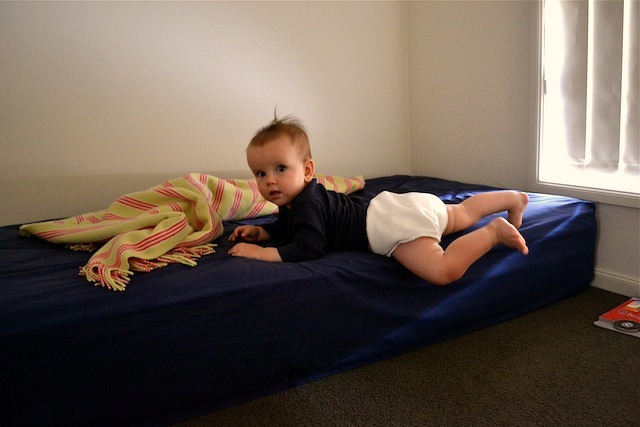 1. We currently co-sleep with our 4-6 month old. Any suggestions on how to transition them in their own room and onto the floor bed?

I suggest start with daytime sleeps. I frequently co-sleep with Otis during the night but during the day he sleeps on his floorbed.

I have found that Otis sleeps better when co-sleeping and it is especially helpful when he is teething or unwell. At eleven months I am in no rush to cease co-sleeping as I feel this will be a natural and slow process.

I also suggest making the transition at your own pace. Like many mothers I am largely unsupported. If I don’t get enough sleep there is no one else to help me get through the day or look after the children while I take a nap. So when considering sleep arrangements I look at where everyone gets the best nights sleep and ignore outside pressures.

When you are ready for your child to sleep in their floor bed during the night I suggest move to co-sleeping or partially co-sleeping (for the first or last part of the night) in their bed. This way their reliance on you can lessen over time. I would also consider using a transition item like a small blanket that they can use when co-sleeping and when they are alone.

2. I currently feed my child to sleep or use a pacifier. Any suggestions on how to help them become an independent sleeper?

I fed my first child (Caspar) to sleep from birth until he completely weaned. I did this because it came naturally, his milk feed would make him so sleepy it was difficult to wake him. He also slept through the night, every night (10-12 hours) from six weeks until he was nine months old. As a first time mother I was delighted to be getting a full nights sleep. Once he hit nine months he began waking for a night feed. When he was completely weaned he slept through the night again. While feeding to sleep is not something I would recommend it felt like the most natural thing in the world and worked for this particular child.

Otis does not feed to sleep or use a pacifier. He is not a completely independent sleeper either. He often requires me to lie next to him, talk or sing before he will settle enough to sleep. My aim is always to reduce his reliance on me in the hope that when he is ready he will sleep independently.

3. My child rolls a lot and I am worried about them rolling out of the floor bed. How do you handle this?

Otis slept on his floor bed during the day since he was only a couple of months old. He was also a fairly stationary sleeper until around nine months. In the early months he would call out to me once he woke up, he would not leave the bed himself. So in these early months I had no concerns about him rolling out of the bed.

Once he was rolling and moving around during his sleep he was old enough to leave the bed safely. I do have some concerns about him rolling out during his sleep although I have never seen him do so. I frequently check on him while he is sleeping and I haven’t yet seen him anywhere near the edge. I think this is because he has spent so much time in his bed he is aware of where the edge is and generally moves up or to the side near the wall. I frequently put a firm thick pillow near the bed so if he rolled out he would fall onto the pillow first.

The best way to avoid these concerns is to start with a low futon type bed or mattress. It can be difficult sourcing the right mattress so I suggest start looking early.

4. My child is now crawling and frequently gets out of bed and wants to play, what should I do?

Yes, Otis does this too. Generally I let him play for a couple of minutes and then remind him he is tired, it’s time to sleep and take him back to his bed. I do this because I don’t want him to get over-tired as then it is really difficult for him to get to sleep. If he is insistent on getting out of bed I will try to lie on the bed next to him and talk, sing or even read. Otis hasn't yet climbed into bed and fallen asleep himself. Although I am hopeful this will happen one day.

5. I am currently setting up our nursery and working out where to position our mobiles. Would the mobile be better over the bed so the child has something to focus on as they go to sleep?

Otis’s room had enough space so we decided to keep the sleeping and movement areas separate.

At first I was really confused about this as there is at least one Montessori text suggesting hanging mobiles above the bed. I asked around and spoke to a lot of people with Montessori experience. In the end the majority of people recommended to keep the areas separate so the child has one area specifically for for sleep (the bed) and an area specifically for play/work (the movement area).

This worked well for us except Otis frequently slept under his mobile.

6. My child is the same age as yours. How much sleep should they be getting?

Otis is currently eleven months old and generally has two daytime naps. He has a morning nap and an afternoon nap. These naps can range from 30-90 minutes and are often impacted by school runs and other activities. Otis also likes 10-12 hours sleep at night but doesn’t consistently sleep through the night.

There are times when Otis’s sleep gets really mixed up. This usually occurs when we are really busy and under stress. It’s at these times I remind myself to slow down and ensure we spend more time at home so we can accommodate Otis’s needs and find our rhythm again.

Wow, sleep is a difficult topic. I hope our experiences helps a little. Feel free to leave me a question especially if you would like me to clarify something.

My last piece of advice is it's never too late to try the floor bed. Even if you use a cot or a crib for the child's first year transitioning to a floor bed at one or even two years will still have benefits. Also please don't feel like you are being judged. I know many, many Montessori families who didn't/don't use a floor bed. If you don't use a floor bed there are still many ways you can incorporate the principles of Montessori into your home.

But please come back tomorrow as I have asked dear friend Meghan Hicks from At Home with Montessori to answer the same questions. Meghan has a wealth of Montessori knowledge and also has experience as the mother of two (very cute) boys.