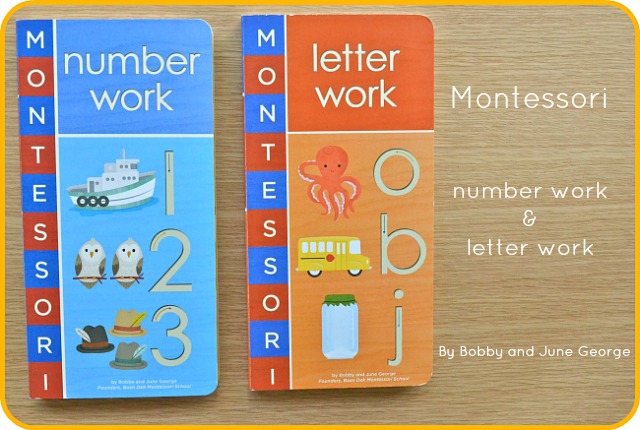 After writing about how Caspar was using Montessori number work to practice his numbers, I received a copy of Montessori letter work to review also. Having these books together is really useful. You can see our letter work book is looking worn, it's certainly getting used.

I would suggest these books are best suited for a child around three years - when the child first expresses an intersest in writing. Although Otis at 20 months loves counting books and Caspar at five years uses these for practicing some of the more difficult numbers and letters.

The books could be used alone, in conjunction with a sand tray, chalk and black board or pencil and paper. The books are board books, thick and sturdy. The numbers and letters are slightly textured, not as rough as the sandpaper letters I've felt.

I've said it before but I think these books are a great at home alternative to the sandpaper numbers and letters. They would also be a good home schooling tool and could be combined with other methods of education. .
'Dear Parent, This is a different kind of counting book. It is based on a Montessori way of teaching that has been successful for over a century: focusing on the concrete before the abstract. For example, your child needs to be familiar with what three objects feel like and look like before learning the symbol "3".'
.
In this book the child sees the image of one owl, turns the page and there is the word 'one' and the sandpaper number '1'. Caspar is still using this book to practice his 6, 9 and 8.
. 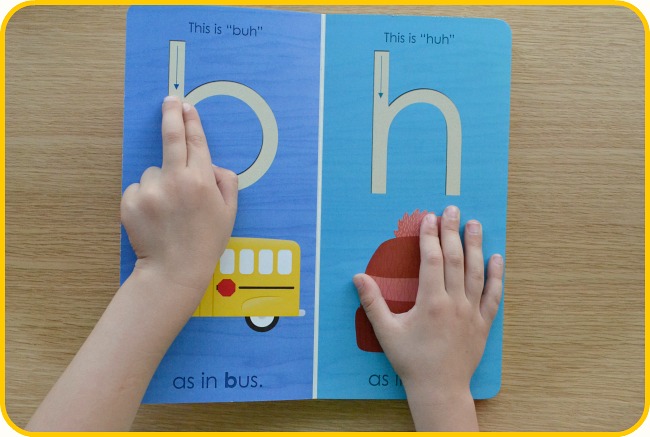 .
'Dear Parent, This is a different kind of alphabet book. It is based on a Montessori way of teaching that has been successful for over a century: focusing on the concrete before the abstract. For example, it is more important that your child first learn what sound a "b" makes ("buh"), and the shape of the letter, before memorizing the name of the letter ("bee").'
.
This book isn't in alphabetical order. First the child has the opportunity to trace the letter and then associate the letter with the sound. Caspar is learning cursive at school but easily switches to print. His writing at home is in print and most of the books he reads are in print. His biggest struggle which this book helps with is distinguishing similar letters b and d, g and q. Here he knows this is a buh because he can see the bus.
. 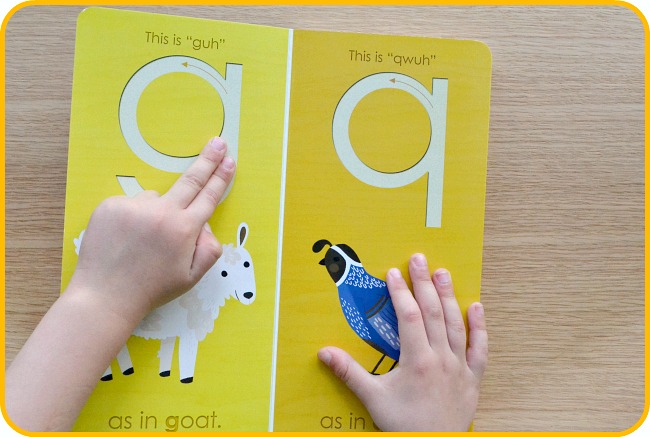 Caspar was first introduced to the sandpaper letters in a Montessori school environment. At home he sometimes traces the letters with one finger, sometimes two and sometimes he just brushes his hand over it. He is left handed though.
.
One minor down side to these books is they don't sit open. Caspar has found it hard at times to keep the book open with his other hand.
.
I know many parents have found the time to make sandpaper letters and numbers. If you don't have the time these two books are the next most cost efficient option.
Montessori number work and letter work are available from Amazon.
.
Montessori number work and letter work are available from The Book Depository.
.
Montessori number work and letter work are available direct from the publisher at Abrams Books.
.
These books have been written by Bobby and June George. Bobby and June are founders of the Baan Dek Montessori School. Baan Dek also has a really interesting blog, worth a read if you have a few minutes spare and has a lot of beautiful school images.
.
I don't often accept goods in return for reivew but I found these books were not only a good fit for this site they are also a good fit for our family. I recieved these book free of charge in return for this review.
.
I know there are a few readers who have purchased both of these books, I would be interested to hear what you think.