Do not tell them how to do it.
Montessori. Toddlers. Books. 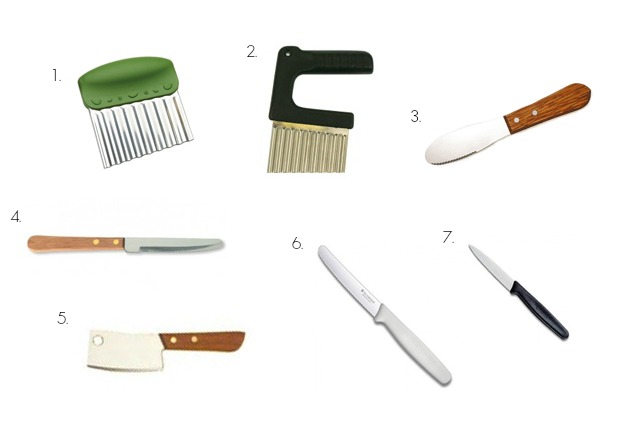 Otis uses a knife every single day. Without fail. Many times a day. He's definitely at the "me do it" stage. He has access to all of his knives now. To begin with I kept most of them out of his reach but over time as his skill level increased and he has acted responsibly we have kept his knives in his kitchen cupboard. Now he chooses which knife he would like to use or it's likely he picks up the first one he sees. But of course, it wasn't always like that.
.
Otis was introduced to a knife in his first weaning set (as seen in this post), as soon as he could sit at the table he had correct cutlery. He has and still on occasion uses this knife to cut soft foods, it's dull - there is no possible way he could cut himself and most of all it's small - easy for him to hold and manipulate. A knife like this or a small butter knife is a great first knife and it's a good idea to start cutting with soft foods such as the banana.
. 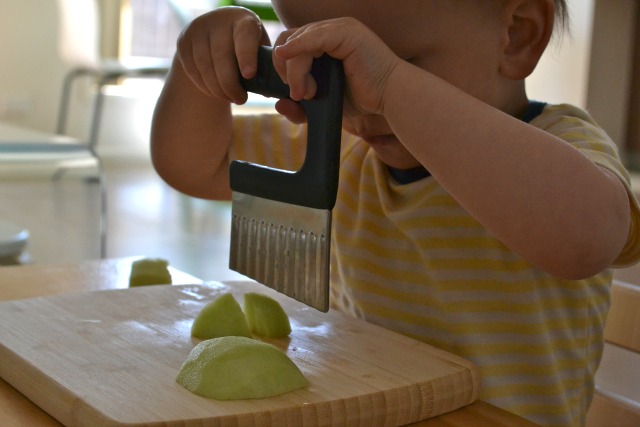 .
As he got older Otis wanted to help prepare harder foods like apple, carrot, celery, pumpkin and potato. At seventeen months he started using knife 1 and 2. Knife 1 is my absolute favourite, it works really well for those tiny hands and Otis got a lot of joy out of being able to use it at such a young age. Best of all both of these two knives require strength and if demonstrated and used with the pressure being applied at the top with both hands on the handle, there is no risk of injury to the child. With these harder foods I still cut them first so that they sit flat on the cutting board and won't roll or move while being cut by the child. These knives are also great for making vegetable chips - at any age. You can also see Otis using knife 1 as he often does, to cut banana bread here.
.
A knife like 3 is a good first serrated knife. This is actually a serrated spreader. Because the tip is round a child can learn to cut using the serrations will little risk to their fingers. Once again the demonstration of this knife is key. I have seen spreaders like this used in many Montessori environments from toddlers up. I have also seen these spreaders in two sizes, a very small one which fits perfectly in a toddler's hand (around 10cm) and a slightly larger one (around 19cm) which helps when cutting larger foods.
.
Knives 4 and 6 are similar in that they are sharp serrated knives with a rounded tip. The rounded tip provides some safety to the child's supporting hand.
. 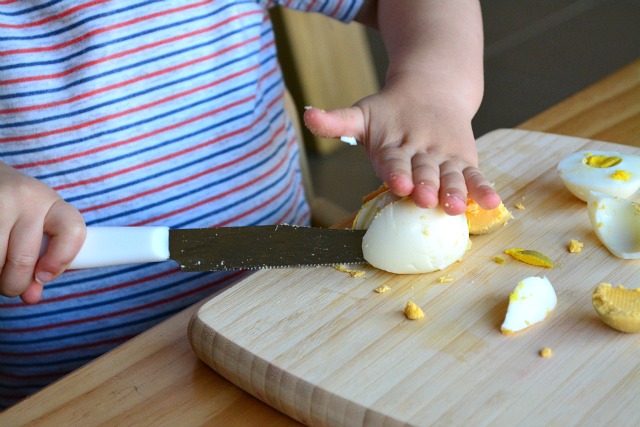 .
In more recent times, since Otis has turned two, he has been able to use knife 5 and 7. Knife 5 is a small cleaver, it's not super sharp but will cut through hard foods. Knife 7 is a serrated paring knife and is sharp. Otis has cut himself with this knife twice, never to become distressed or draw blood but he has cut his skin. I like this knife because the child (still a toddler!) learns to use a sharp knife (which is genuine, useful and honest) and it is small enough to be controlled by their small hands. This is where we are today.
.

Here is a post showing Caspar cutting many years ago - Kids Cutting.
.
This is a lovely post from Montessori on the Double Cutting with a knife and other kitchen activities.
.
I have sourced our knives locally in Australia at local kitchen stores, all except knife 5. which I purchased from Michael Olaf. Knives are as follows (with o/s links): 1. Wavy Chopper, 2. Wavy Vegetable Slicer, 3. Similar Spreader, 4. Blunt Tipped Serrated Knife, 5. Tiny Cleaver, 6. Round Tip Serrated Knife and 7.Sharp Serrated Paring Knife.