Getting ready for (Montessori) school 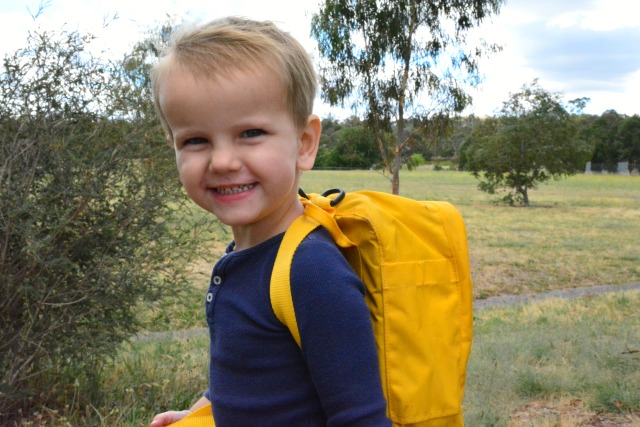 It is that time of year when we check the school uniforms to make sure that they still fit. Wow how kids can grow in the period of a few weeks.

For Otis this will be his first year at school. When Caspar started school I was freaking out nervous. Cry in the carpark kind of nervous (I was pregnant with Otis and my husband was overseas and I'm already an emotional person). So with Caspar I cried. I agonised. Was I (I mean we) doing the right thing, was he ready?

For Otis, perhaps it's just because he's the second born and more socialised, I'm excited. I am excited for him. He is ready to leave the safety and comfort of home to establish his own community. Although the intimacy between child and the teacher may compare to family, this really is the first time Otis will establish this own community outside of our family.

A few things have really helped in the transition to school so far.

1. Having a Montessori style home environment. Mostly Otis can use the toilet, dress, put his shoes on, pour a drink (when he is thirsty without having to ask), hang his bag/apron up all independently or with minimal help. He is not without fault but he has become accustomed to an environment where this level of independence is expected. He is accustomed to cleaning up a spill, putting aways items when he is finished - hanging the broom back up on the hook or putting an activity back in it's tray then back on the shelves. Again not without fault and I feel that if children are not used to this it wouldn't take them long to adjust.

2. Attending a Montessori toddler program. One of the biggest take aways for me from Otis attending the Montessori toddler program is that he has learnt how to interact in a Montessori classroom environment, he  already knows the rules. This is by absorption - simply by being present. He knows how to push in his chair (mostly) quietly, walk not run. He has learnt how to ask an adult for help (other than his parents), he has learnt how to interact with a teacher, how to ask for more cheese, crackers or whatever it may be. There are also a few materials that are the same (or really similar) in the toddler and Cycle One (3-6 years) classroom, so he will know how to use some of the materials.

3. Establishing a relationship with his Directress. For some children it doesn't take long to form new relationships. Other establish this relationship in the first few days or weeks of school. Otis has had three or four transition sessions at school. Each were around half an hour long. It's this time that has helped him to build trust in his Directress. Otis is also starting with Caspar previous Directress which means there is already some familiarity. A positive and open relationship including trust between the Directress and parents/caregivers is also essential especially in the early days - feedback to and from the Directress can really help sort out any issues and help a child adjust. Our Directress also offered a home visit which would also help to establish a positive relationship.

4. A school with a tailored transition program. One of the things that I absolutely love about our school (and other schools like it) is that the transition is 100% tailored to the child. Otis will start at one hour on his first day (as he has already been there comfortably for half hour sessions) and build up from there until he is attending for the full three hours. How fabulous, if he isn't coping there is no pressure on him. A full school week for Otis will be three hours a day, five days a week.

We have explained to Otis on many occasions that he will be starting in (insert classroom name here) with (insert Directress name here) soon and he gets it. His school bag and his school hat are hanging ready (he is still too small for the smallest uniform). I am sure there will be some ups and downs and things we haven't thought of or that were totally unpredictable. I am also familiar with many families who haven't had such a preparation, many children start barely toilet trained and you know they do alright. They adjust, some really quickly.

For children not familiar with a Montessori environment and even for those who are (we've been reading it to Otis) I feel that the book Jack Goes to Montessori School would be really helpful.

So we still have two weeks to go and I am (ok I admit it) a little nervous. The best thing that I feel like I can do now is to be relaxed, have some fun with the boys, get them back into an early bedtime routine (yes, school holidays in our house means sleep-ins and extended periods in pajamas) and approach Otis's first days and weeks at school without expectation but with positivity and optimism.