I have briefly mentioned the Toilet Learning Booklet which I have produced with Meg Hicks (from At Home with Montessori and The Child's Space). Meg has been such a wonderful friend and mentor to me. She has a lovely and warm approach to parenting and she is also a really good communicator. Toilet Learning The Montessori Approach is hopefully the first in a series of booklets that we produce together. Meg is also a busy mum, she has a very interesting Montessori story including a couple of fabulous projects in progress. I asked Meg to share her Montessori journey. 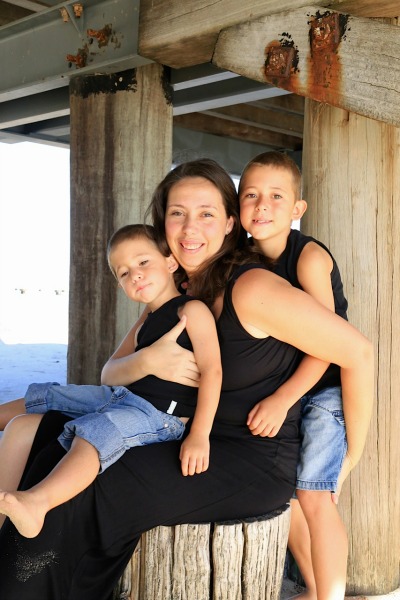 Collaborating on our first e-booklet got Kylie and I on the topic of how we came to be involved in the Montessori world. Kylie invited me to share my story here…
I started out at a Montessori school, in Cape Town, South Africa, when I was three. My mother chose the school based on its reputation for high quality learning experiences for very young children. I was three at the time and some of my strongest childhood memories are from that period in that my life. I clearly remember the number rods, the map cabinet, care of our classroom rabbit, and the polishing works. Those were a staple in my life at Montessori school - with my teacher commenting on that fact that her brass objects had never been cleaner!
Moving on to a traditional school (there were no Montessori schools for older children in my area), it was clear that I had a different kind of work ethic. That remained with me throughout the rest of my schooling and even now into my adult life. My lifelong interest in the world had been awakened and managed to survive the onslaught of deadening tactics commonly employed by educational institutions! I learned to read at a young age using the Montessori materials at my disposal and became an avid and insatiable reader, another character trait that stuck.
On to high school and then university where my lifelong ambition to become a teacher was realised. However my first three jobs (as a teacher in a special needs school in Botswana, a high school music and drama teacher in New Zealand, and a relief teacher in a primary school in Australia) were terribly stressful and not at all fulfilling. I left feeling disillusioned and indecisive about my future as an educator. Then I happened to stumble across a listing in the Yellow Pages for The Montessori World Education Institute. The people I spoke to encouraged me to make contact with and visit local Montessori schools, as several of them were looking for teachers. After visiting one school and spending three weeks as an observer in the classrooms throughout the school (3-6 and 6-9) I was invited to join the community as the founder of their inaugural Upper Primary classroom for 9 to 12 year olds. I undertook my Montessori teacher training for 6 to 12 year olds and was mentored by several wonderful and experienced Montessori teachers in that school and other schools.
Leaving that position a couple of years later to have my own child was both exciting and sad, as the connections made within that community will last a lifetime. I decided to pursue Montessori Infant Toddler training, and was a little disappointed in what was on offer, needing something that was both flexible and affordable. But everyone starts somewhere! And I have come to realise that Montessori as a teacher is more about the journey than the destination. We are so blessed to have inherited the legacy of the body of information that Dr Montessori left behind. Indeed her prolific writings, and that of her counterparts and collaborators, are a wealth of knowledge that seems a century before its time.
I pursued training for the 3-6 level, and then started a community-based Montessori project supporting families in our regional area to establish early learning relationships between parents and children, to empower parents to make the most of their role as their child’s first teacher, and to introduce the philosophy and approach to life that Montessori offers to families with children. This project went on to win a national award for innovation and excellence in the provision of children’s services and is still running 7 years later, under a committee of management.
More recently, I have been fortunate enough to have written articles for various Montessori publications around the world, presented workshops at three international Montessori conferences, and run a short course at the local campus of Edith Cowan University for fourth year education students on alternative approaches to education. I now homeschool my two sons, aged 4 and 9, run a Montessori-inspired “unschool” for children aged 3-12 looking for a part time alternative to school, run a Montessori Parent-Infant-Toddler Community and consult with parents around the world helping them to create child-centred spaces within their homes. I am currently undertaking trainer-in-training studies through the Montessori Institute, with the intent of becoming a teacher trainer for that organisation and am collaborating with the Centre for Guided Montessori Studies in the creation of their Infant Toddler Teacher Training course which will be MACTE accredited.
My true passion, lies with the very young child, the parent and the family. My own journey through homeschooling has awakened my awareness of the role of the family in the development of the child. I find real meaning in supporting parents in their work of supporting children, reinstating their power in a culture that has dis-empowered them almost entirely, advocating for the rights of the child within the family and within society, and helping to make the world a better place by starting at the very beginning of life when the critical period of development begins.
My work is slowly beginning to take shape and this collaboration with Kylie, and the realisation of our dream to provide clear and simple information to parents around the world who want a child-led, family-centric approach to parenting and education, has reached the first milestone in the Toilet Learning Booklet. We plan to publish other supportive booklets for parents of very young children, and sincerely hope that they bring as much joy and satisfaction to each of you in the “doing” of them, that they have brought to us in the writing of them.
Sincerely and with many warm regards
Meg