On changing schools - and how all Montessori schools are different 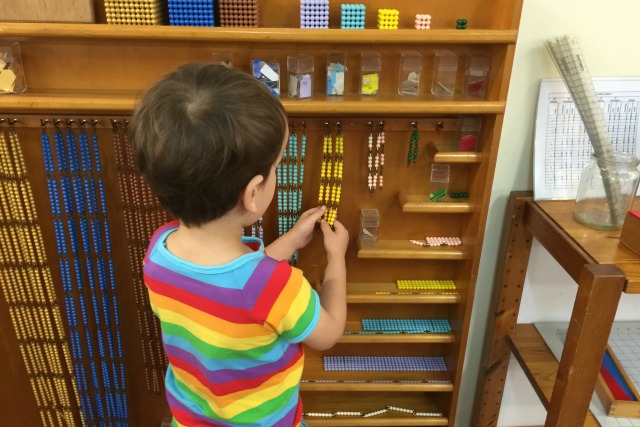 Last year we moved from Canberra to Brisbane. We moved due to my husband's work however he grew up in Queensland (although he's not familiar with Brisbane) and would probably consider himself a Queenslander.

At the start of this year (2015) Caspar (7yrs) and Otis (then 3yrs) started at their new school. We home schooled the last term of last year to ease the transition to a new location. Late last year we toured the new school. Caspar also had a trial day to get a feel for the school and his classroom.

My first impressions of the Brisbane school were fantastic. The school is situated along a river and is surrounded by large established native trees. It is a really beautiful location. The school also has facilities for children to 12-15 years. I hadn't seen a Montessori school environment for this age group before and loved it, I was amazed actually.

We moved from one Montessori school to another. Both are private and very similar in philosophy. I know of at least two staff at our Brisbane school who have previously worked at the Canberra school. In theory, on paper the schools are very similar. Which is a good thing! All of the differences are practical, day to day kind of issues.

Both of my children had been at the Canberra school since they were 18 months old in the Parent Toddler Class. However Otis had been around the school since he was a day old. They were both very familiar with their surroundings and very familiar with staff and students. Many of the staff and students had become like family to us. It was extremely hard to move. I was worried about how my children would adapt to a new school where there wasn't such a level of comfort and trust.

We met with Otis' class directors before the start of the school year. A wonderful part of moving from one Montessori school to another is the familiarity of the environment and materials. Even though classes can look different - many if not most of the materials are the same (Otis knows what they are called and how to use many of them) and the environment tends to have that same feel (child sized, warm, friendly). When we walked into Otis' classroom I was instantly at ease. Otis was asked if he wanted to work with some materials and he was confident and happy working with some puzzles, he got out a work mat and was content. When he couldn't find a part of the constructive triangles and he asked his teacher for help - I knew he was going to be ok.

Some of the differences between schools are just annoying but you get used to it, it's administrative. In Brisbane they call the classes 'Children's House' and 'Lower Primary', 'Middle Primary', 'Upper Primary'. Which still confuses me. Canberra use the terms Cycle One, Cycle Two and Cycle Three. I still haven't worked out the Queensland grade system so I have no idea what grade my children are in. School starting times are different and Caspar's class starts earlier than Otis' (which I still can't figure out why). Brisbane is less strict when it comes to healthy eating in the classrooms and I see much more licensed cartoonish clothing at the Brisbane school. Both are bugbears for me. I know teachers at both schools work hard on these issues.

Otis' class has two directors. This concerned me to begin with. It's only with time that we can learn to trust. Having two directors has turned out to be wonderful and it absolutely works. Otis' class doesn't do the birthday walk around the sun celebration which is a big disappointment as I know how much both of my children adore this tradition. Brisbane also seems very well staffed (in more numbers per student and more specialised/support staff) which is fantastic.

In Brisbane Otis brings his own morning snack. In Canberra the children prepare a group snack of fruit and vegetables. However Otis' Brisbane class cooks very often and with lots of variety - I love how often they are cooking and baking and how there is always a story behind what they are making.

Our Brisbane school appears to have lot fewer class pets. I loved in Canberra the variety of class pets and how Cycle One classes have Guinea Pigs. Otis' class in Brisbane has fish and Caspar's class has a mouse. Neither are as interested or as involved in the class pets as they were in Canberra - where the class pets were prominent and much talked about.

The schools differ in the extended day policy. Canberra has a relatively new option of the extended day program beginning once a student turns four. In Brisbane extended day generally commences once the child is four and a half. The Brisbane school however is a registered child care provider (the child care rebate can be claimed under some circumstances) while the Canberra school is not. This means that in Brisbane the younger children for example three year olds can be in the class room the school entire day. Confusing? Yes!

There are also a lot more small differences. Otis was used to group time in the mornings and much to his disappointment his Brisbane class doesn't have show and tell. Brisbane has much more established class and school vegetable gardens which is fantastic (the older children sell the produce at school markets!). Within Otis' outdoor classroom they have herbs which the children regularly tend to, harvest and eat.

Both boys took a couple of weeks to feel comfortable in their new classrooms. When we moved to Brisbane both boys were happy and fine. But once they started school reality set in and this is when they really missed their old teachers and friends. Caspar has seen and written to a couple of his friends from Canberra and has made some really good new friends. Otis still often talks about his friends from Canberra and while he has made two solid 'best friends' it's taken him a while to become familiar (and remember the names of) all the children in his class.

Strangely Otis still speaks of his Brisbane school as his 'new school' and his 'new friends'. Hopefully he will drop the 'new' soon - we are now towards the end of the second term.

Caspar's (Cycle Two) class studies French, in Canberra it was Korean. He has dedicated sports and music times here but as far as I am aware not science as in Canberra. He has always struggled with his hand writing. In Canberra his teacher spoke to me at length about not pursuing cursive with him. His teachers here in Brisbane are ensuring he does cursive - this is extremely difficult for him.

Our Brisbane school doesn't feel like home yet but we are comfortable and I am sure it will over time. We are really fortunate for so long to have access to great, high quality, genuine Montessori school environments.