The Montessori Child at Four Years 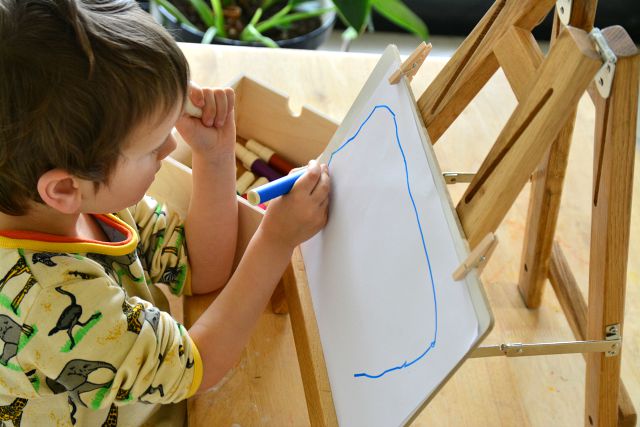 I don't think about childhood development as much as I did when Otis was a toddler. However every now and then I think 'wow' I haven't seen you do that before - 'that's new'.  We know through Montessori that children do not grow or development at a consistent rate throughout life but rather through phases, through stages of development.

Montessori described the stages of development as a rhythm of six year cycles, each cycle having an opening and closing phase. The first phase of each cycle opens up to a set of particular experiences and consequently to the related acquisitions and conquests, and the second half consolidates these achievements in preparation for the next cycle. The line of regression indicates the passage into the acquisitive stage when assimilation, refinement and acquisition of skills occur. I have especially noted this with Otis'. Since turning four I have really noticed a explosion in his fine and gross motor skills. The child who was learning to jump can now hop - backwards and forwards, the child learning to draw a complete circle can now write his name.

In many ways this is a great age/stage for parents, the child is past the peak of the sensitive period and as these skills are refined it is a time where we notice the outcome. I see it as the consolidation period before the child enters the second plane.

The Four year old is in the sensitive period for:

The child is now aware of what they are learning and are no longer unconsciously absorbing. "The mind's power to absorb tirelessly from the world is still there, but absorption is now helped and enriched by active experience. No longer is it a matter purely of the senses, but the hand also takes part. The hand becomes a 'prehensile organ of the mind'.

So, from the age of three till six, being able now to tackle his environment deliberately and consciously, he beings a period of real constructiveness. The hidden powers he was previously creating are now able to show themselves, thanks to the opportunities for conscious experience which he finds in the world about him." - Maria Montessori, The Absorbent Mind.

"The richness, the depth and the usability of the construction is a reflection on the support of the adults in preparing an environment rich in opportunities. The child must be left free to carry out this work without obstacles either from the adults or the environment. The child must be free to make his own mistakes and to adapt his behaviors to what is most supportive in living and doing. It is not the task of the adult to construct the child. It is the task of the child to construct himself, creating the man or woman he/she is one day to be! This is a critical period of time when the child discovers that the world is a marvellous, interesting place to know." Shannon Helfrich, The Conscious Worker.