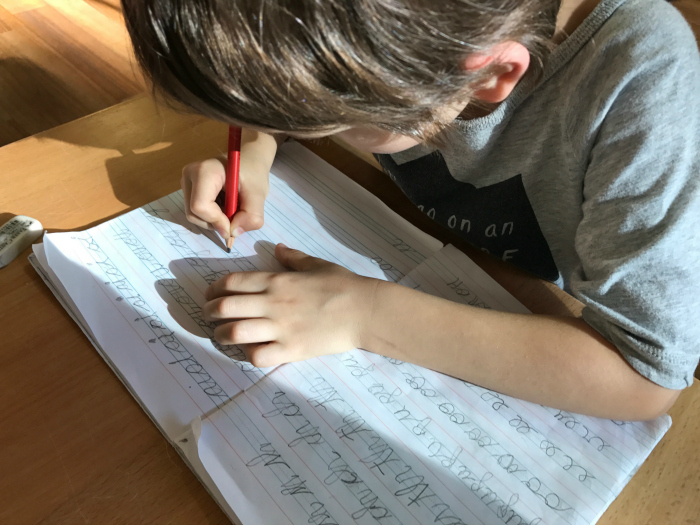 Today I felt privileged to watch my five-year-old practice his cursive handwriting. During our parent-child session at school, Otis (above) showed us his lovely looping style as he repetitively wrote out some phonograms. I loved his focus. I love that he goes to a school that still believes in cursive. I really wanted to write about how important it is and I've decided to republish this slightly edited article written by Montessori parent and teacher Meghan Hicks. I first published this article last year but it is still very relevant today. He is Meghan's article.

In Montessori classrooms the world over teachers debate the merits of teaching cursive handwriting first to the children in their environments. In non-Montessori settings the discussion is a moot point, as most traditional schools have phased out the teaching of cursive entirely and have either adopted a ball and stick print, or a blend known as italics. But many parents are not aware that cursive handwriting is an essential part of the Montessori experience, and although some believe with the advent of the digital age that handwriting should take a back seat in favour of keyboarding and word processing skills, good Montessori teachers know that learning cursive is so much more than just the letters on the page.

First, a little background about the language curriculum in a Montessori classroom. We use language for two basic functions: it helps us to communicate with one another, and it provides a system of symbols for our thoughts. When creating the Montessori curriculum, Dr Montessori founded all of her lessons and materials upon several key characteristics of the children she observed.

In language development, Dr Montessori was very clear from the beginning...children with sufficient sound- symbol knowledge will find it easier to write down their own thoughts as a first step, rather than read the thoughts of others. In The Discovery of the Child she says, “Writing is developed in the small child easily and spontaneously, in the same way as speech, which is also a motor-translation of sounds which are heard. On the other hand, reading forms part of abstract intellectual culture which is the interpretation of ideas represented by graphic symbols, and is acquired only much later.”

Initially the child will use the moveable alphabet to “write” their thoughts down. They have learned the symbols and the sounds they make and can break up the word they want to write into its sounds and place a symbol for each sound they hear. But as they progress in this work of writing their thoughts they will want to explore their ability to write by hand. The preparation that has taken place up to this point with the Sandpaper Letters (used to develop muscle memory for the shape of each sound) and the Metal Insets (used to provide creative opportunity for the development of fine motor coordination and pencil grip) will now be combined with their sound-symbol knowledge and will explode into writing.

Good handwriting relies on a few environmental factors. Good posture, with the writing surface at the right height for clear vision, and feet touching the floor is important for stability. Writing tools that provide sensory feedback to the hand are important as well, so chalk, pencils, crayons are all great while textas or felt-tips are not so good. Fine motor control (and pencil grip) complete the picture. The most important part of writing is finding a personal style in which the hand remains relaxed and does not feel tired. The fine motor skills associated with handwriting are not fully developed until the age of ten.

So why cursive handwriting, specifically? Beyond the aesthetic reward of handwriting that is beautiful to look at, there are several practical and scientific arguments for teaching cursive writing.

To finish off, the most important part of the writing process is finding reasons to write. Children are experts at detecting a “lesson” and will often run in the opposite direction or dig their heels in when they sense that we are steering the ship. Providing a home environment in which writing is modelled, celebrated and useful, gives the child a reason to want to write. This is more valuable than any lesson on letter formation. So creating writers the Montessori way is about preparing the mind, preparing the hand, preparing the environment and then stepping back and allowing the child to do their work. As long as there is a reason to write, to write purposefully, to write beautifully, the child will meet you right there.