The Children's Skin Care Range You Need to Know About (Sulphate and Paraben Free, Vegan, Carbon Neutral, Made in Australia)
A Quick Art Activity - Plaster Gauze!

Today I would like to introduce you to Jasmine from Three Minute Montessori (blog here). I hope you enjoy getting to know Jasmine, she is a breath of fresh air!!

1. Can you tell us a little about yourself, your family and about where you live in Singapore?

I probably should make it sound like I've got it together, but truth is my children have turned my life upside down. I had two kids within the span of sixteen months, so I went from FTWM to PTWM and finally to SAHM. Dylan is 3.5yo and Emmy is 2yo now. Between mothering and teaching Literature to a class of high school children, there's no question which is harder! We live in sunny Singapore, in a neighbourhood which is best described by locals as "heartland". It may not be very upmarket but it has everything we need - the lady at the coffee shop knows my order before I even say anything, we are near to several playgrounds and a small park, and it is close to the children's maternal and paternal grandparents. Recently, my husband was offered a place to do his Masters in London, United Kingdom, where we have just moved for the coming year.

I first read about Montessori when my eldest was 3 months old. As a teacher in the Singapore education system, student-centricity, or putting the student's social, emotional and intellectual health first, undergirded our policy formulations and curriculum planning. As a first-time mum, something did not sit quite right with me in the literature I had been given by hospitals, websites, well-meaning friends, that claimed that babies were helpless little creatures in need of much adult intervention and structuring. So when I found Montessori, it immediately resonated with me - not just the pretty trays or the prepared environment, but Dr Maria Montessori's conception of the child: the child that is self-directed and will blossom according to his internal timeline, not ours. What we do as parents is simply to observe deeply and lengthily, and facilitate that independence and interest. I explored other early childhood philosophies too, such as Reggio Emilia and Waldorf, but I now see the value of immersing oneself in one approach and for us that has got to be Montessori. 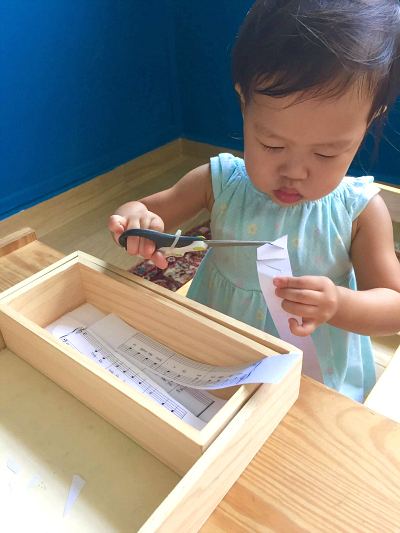 There is a small but growing community of really lovely parents, both Singaporean and internationals based here, who are eager to learn about Montessori.

One challenge that I personally face is overscheduling. There is a huge emphasis on academic achievement, so children as young as two or three are often scheduled for loads of enrichment classes, on top of regular childcare or schooling! This is done out of love, by parents or caregivers who just want to provide their children with the best, but it leaves children with precious little time to engage in self-directed activity and unstructured play, which research now shows to be key to fostering problem-solving and creativity while having a protective effect against stress.

My husband and I therefore decided that besides his Montessori-inspired school, Dylan will have zero enrichment classes. The only enrichment he gets is park time, lots of it, or baking with Grandma, as I can't cook for nuts. The structure of his schooling hours is balanced out by the freedom he has in the home environment.

As for Dylan's Montessori-inspired school, I say "inspired" because while it attempts to follow a Montessori work cycle, it must include an hour of Chinese lesson, which is mainly singing, dancing and writing in Mandarin. I do wonder if the Mandarin component could be integrated more seamlessly into the work cycle though. Many schools in Singapore provide bilingual instruction in English and Mandarin. Dylan's Chinese teacher happens to be his favourite teacher! 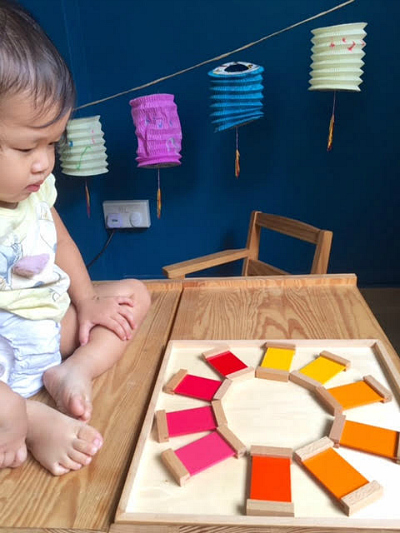 4. Are there any specific resources, classes or shops you can recommend for parents in Singapore?

I haven't tried any Singapore-based, Montessori-specific resources myself. I do however love a dollar store called Daiso, where I get the bulk of my materials from.

When Dylan turned three, I began to explore Montessori geography and peace education, as I noticed he was asking many questions about his place in the world. I realised that Singapore was an ideal place for sourcing Singapore or even Asia continent boxes, as we are home to four races. I would recommend that Montessorians visit Singapore's Chinatown for Chinese curios, Little India for Indian trinkets, Geylang Serai for Malay items, Joo Chiat Complex and Arab Street for ethnic textiles, and my favourite place in the world, Katong for Peranakan culture and food. 5. You know I love your site Three Minute Montessori (blog here). Parenting can get a little busy (chaotic?) with two young children and your site is really relatable and helpful. What is the aim of your site, how are you hoping to help other families?

That is so kind of you! "Relatable" is a huge compliment. I don't see myself as an expert by any means, nor even a blogger as I lack the photography and writing chops of the many bloggers that I do admire, merely a fellow parent on a Montessori journey. Since setting up the site, I've heard from many invested parents all over the world, who want to start their Montessori journey but don't know how, or are put off by the beautiful but expensive materials. The reason behind the name, Three Minute Montessori, is simply that I wanted to show that a Montessori activity can be set up in under three minutes if you are time-pressed, and the materials can come straight from your kitchen and dollar store! Montessori is for everyone.

It was really hard for me going from one child to two, especially when both were under two! I could devote myself to one child, but with two I cannot physically be in two places at one time. With two children, it became even more imperative to prepare the environment to be safe and accessible. Emmy is naturally drawn to watching her older brother work, so creating activities pitched to challenge Dylan sufficiently yet engage Emmy is something I am constantly fine-tuning. 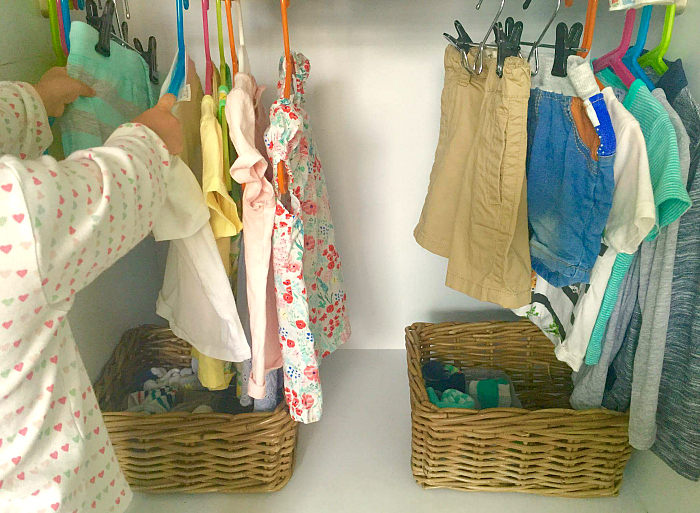 Finally, do you have any tips or suggestions for parents beginning Montessori in the home? What are the key elements you have found     useful that you can recommend to others?

If it is your child's first time attempting an activity, it is quite developmentally-appropriate for him to throw, overturn or basically use the materials in any way other than what you have planned!

Also, Montessori isn't just about isolated activities or trays. Montessori is a lifestyle that starts with respecting the child and his capabilities. This permeates all aspects of parenting, whether it is how we communicate, discipline or facilitate the child's interests. Start small, whether it's lowering the hand towel to your child's height, or offering him a towel to wipe up his spill, and be amazed by how much your child has already absorbed from observing you, and what he can do, even as a baby. A huge thank you to Jasmine for sharing her experiences with us and best wishes for London!!