How to Make Mushroom Spore Prints!! (with supermarket mushrooms)
Black and White Mobiles for Montessori Babies - including alternatives to the Munari!

Today we have a guest post by Susan from Emil Und Mathilda. Susan has recently completed her Montessori Diploma. I love following her and her Montessori journey with her two boys. Today she is sharing a few Montessori maths activities for children approximately three to five years. I hope you enjoy!

My name is Susan, I am a mom of two and a German Montessori blogger. I really love to create and to do things myself, especially for my wonderful boys, Emil and Oskar (19 months).

My oldest son Emil is 4 years old and during the last year his interest in numbers and counting was increasing week by week. I am simply amazed by his growth and how he is learning with such an easiness and love – it’s a pure pleasure to follow him. 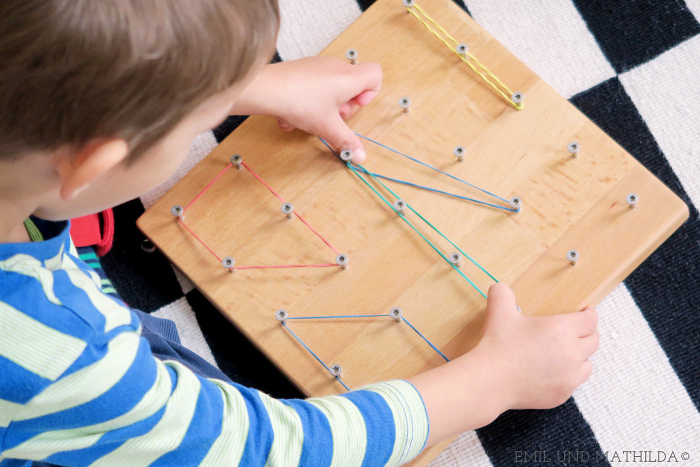 At 2.5 years he begun using our wooden Geoboard and created random shapes or patterns. Now at the age of 4 he uses templates with specific shapes, which he puts on a stencil and then try to copy them on the geoboard.

I also made some simple Geosticks for him to build even more geometrical shapes. 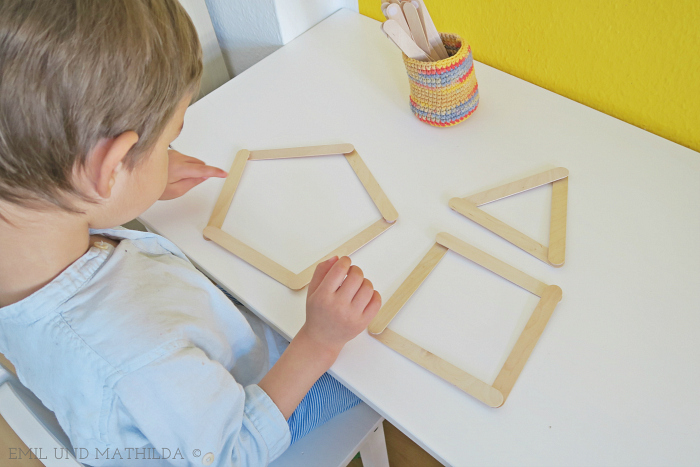 As for numbers, we started with self-made tactile numbers made out of clay and red wooden beads. 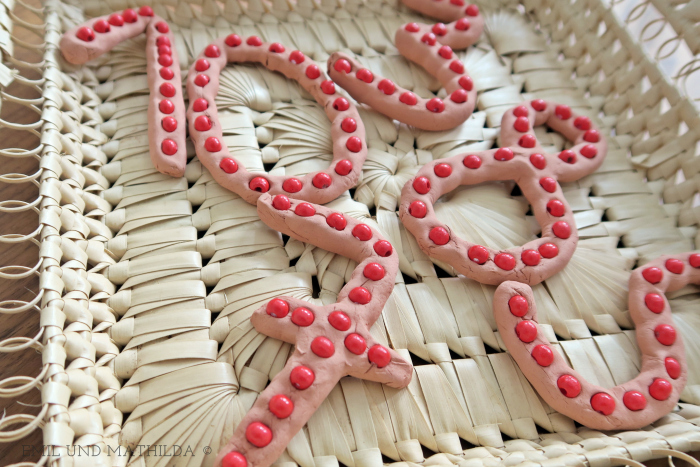 He learned the numbers by presenting them with the three-period lesson. 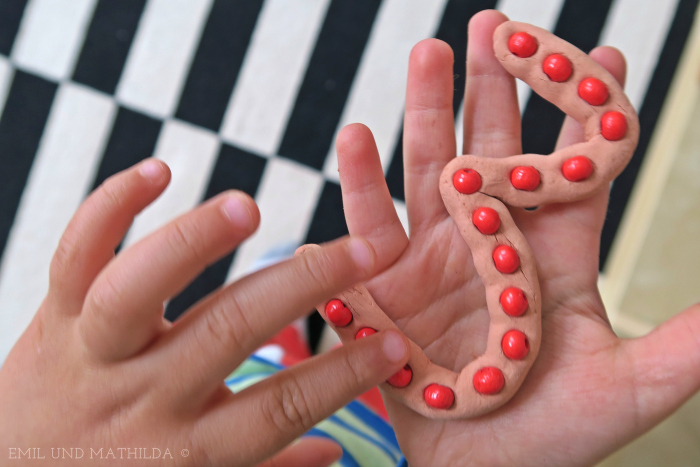 As he soon after started counting each and everything he passes during the day, I created two different materials for him. 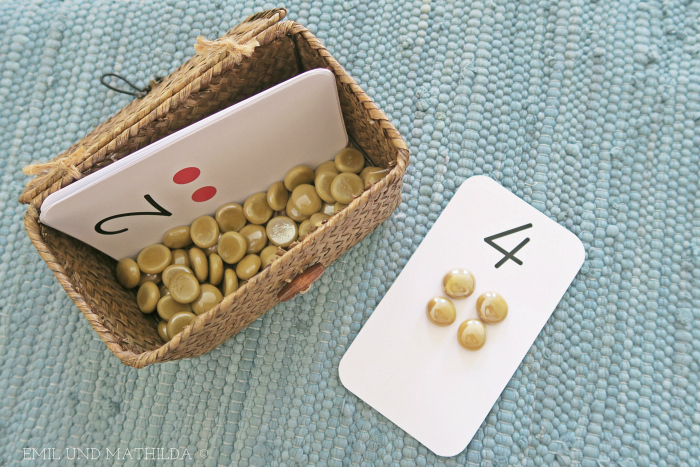 First are cards based on the original Montessori material numbers and counters and second is a great board game with red and blue cubes based on the so called numeric rods.

The cards with the numbers and counters (pictured above) can be downloaded here. 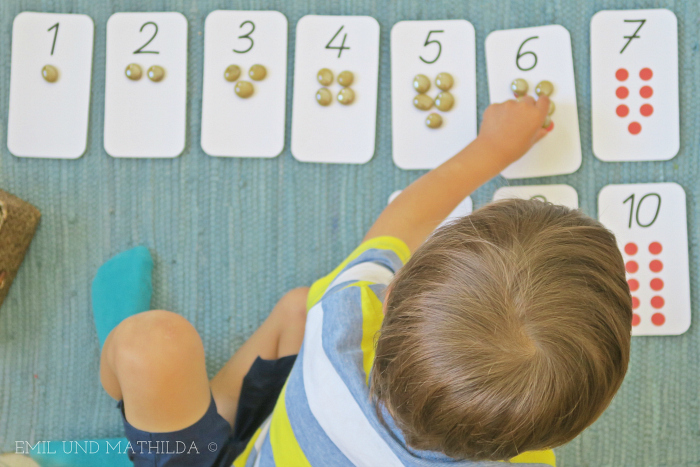 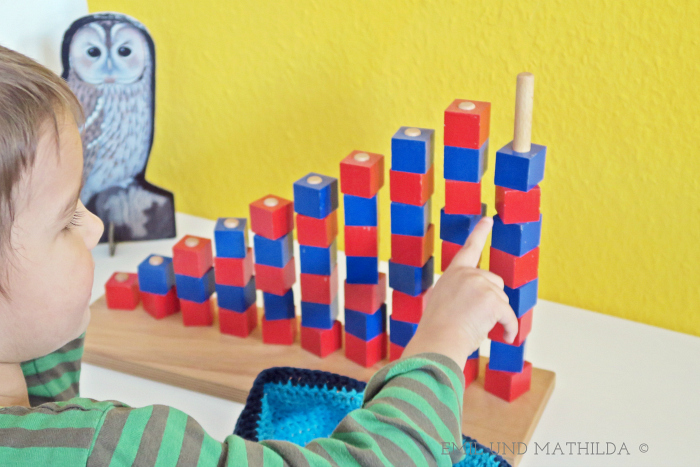 He totally loves especially the last one, because it grows simultaneous with his skills. At first, he just counted the cubes from 1 to 10 over and over again. Later he combined the cubes with little cards. 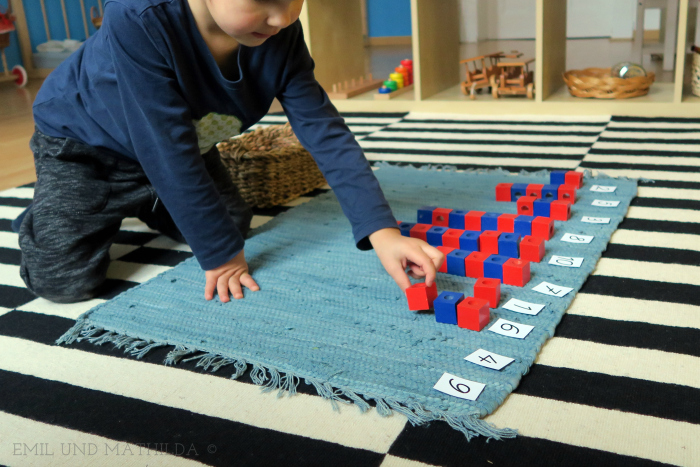 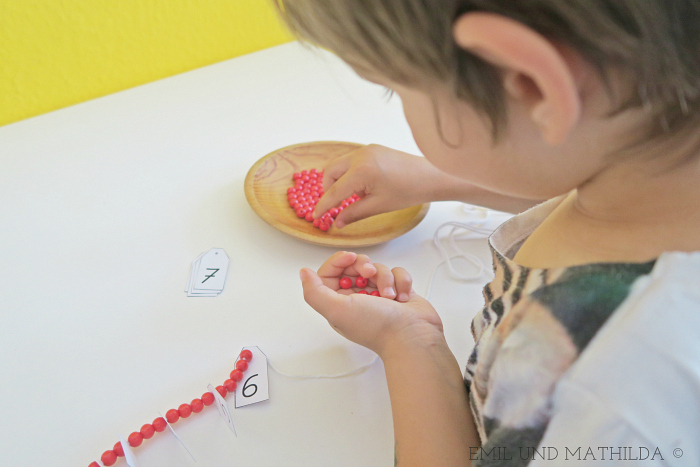 Number cards for counting wooden beads (pictured above) can be downloaded here.

I always try to get the essence of an original Montessori material and translate it into something more suitable for our home (mostly space wise, but doing things myself also saves a lot of money especially when it comes to Montessori materials). So instead of the original Seguin board, I made special cards for Emil as he showed more and more interest in calling out bigger numbers. 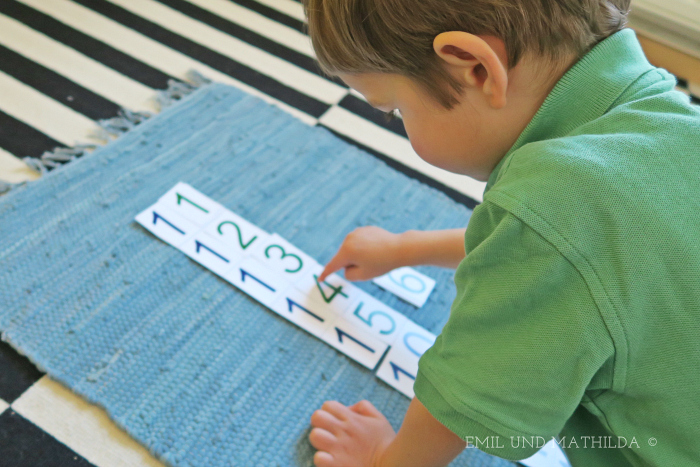 Meanwhile, I introduced him to the golden beads, which I made out of wire and plastic beads (took me almost forever…). 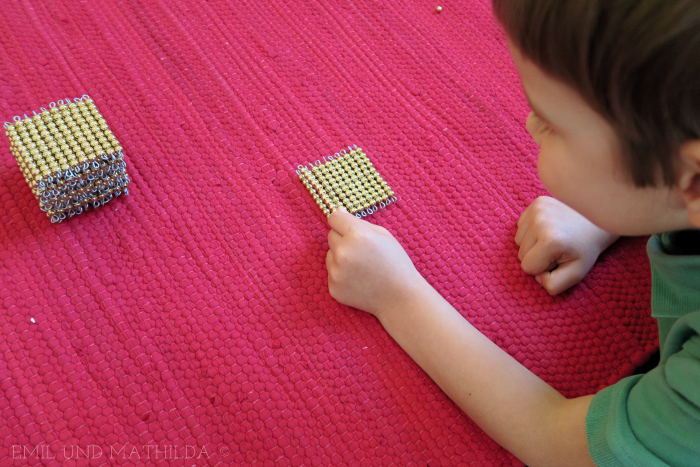 I am looking forward to following my boys on their journey, their happiness, interest, and passion for experimenting and learning will always be my biggest inspiration.

Thank you so much to Susan for sharing these activities with us and also for writing in English, which she did very well!! You can find more from Susan on her blog, Facebook, and Instagram! Her latest post is fantastic, including details on a lovely wash table/care of self area for Emil (4 years) and Oskar (19 months).