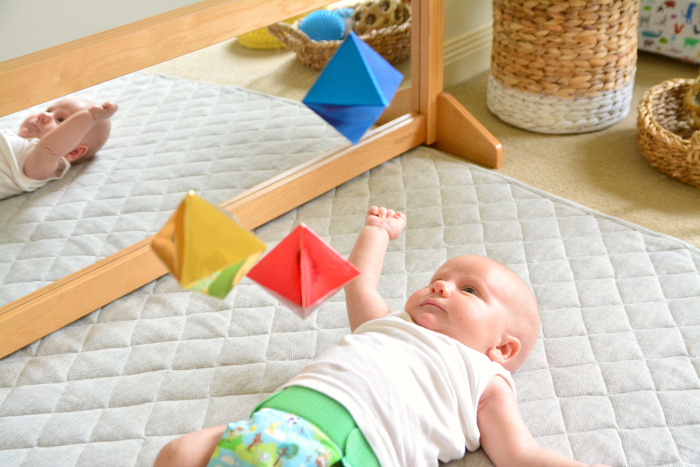 Mobiles are considered to be the child's first work but have you ever wondered what are the benefits of the mobiles, why go to all the effort, what's the big deal? There are physiological and psychological benefits to using the Montessori mobiles with your infant.

"The process of myelinization of the nerve fibres is very quick and begins with the eye muscles. The child learns to control them in one month allowing him to follow what is happening in the environment much better. This is already an important step, since it implies a freedom to observe. Adults should recognize this progress and give the child the opportunity to make use of his new ability." - Understanding the Human Being (Australia here).

We know that the Montessori series of mobiles promotes visual tracking and visual discrimination, develops concentration and strengthens muscles in the eyes, neck, arms and even core muscles. Some mobiles are suitable to use during tummy time which can also promote the child slithering or creeping towards the mobile.

"The first essential for the child's development is concentration. It lays the whole foundation for his character and social behavior. He must find out how to concentrate, and for this he needs things to concentrate upon." - The Absorbent Mind. For the young infant, the mobile provides the perfect opportunity for concentration.

The child is also learning about independence, the young infant is working on their own for extended periods of time. The child will increase their concentration while tracking the mobile. I've observed my children kicking and waving their arms in excitement at the mobile and I've also observed them completely still in deep concentration.

There is also a psychological purpose to the mobiles. When the young infant is visually tracking and then physically moving toward the mobile they are developing coordinated movement in order to reach, touch or bat at their (tactile) mobiles like the ring or bell, the child achieves a sense of accomplishment, fulfilment, they develop a sense of trust within their environment and themselves. The child begins to learn they have freedom of movement, they can see an object, reach for it, bat it or grasp it and explore it, knowing that if they want something they can go and get it. There is a developing relationship between movement and knowledge, the child begins to understand they can work towards a goal or object and develop their movement towards that goal or object. For the infant the mobiles are often the first stimulus, the first opportunity for this development.

The mobiles can be placed in an area where the child can be present with the rest of the family. Perhaps above a mat in the living room or playroom. While we have put most of our mobiles in the children's bedrooms, we've also (at the same time) had tactile mobiles (mainly the bell on a ribbon) in our lounge room over a soft lambswool rug. The Joyful Child recommends not putting the mobile above the change area where the conversation with the parent or caregiver is more important than the visual distraction. It's also not recommended to hang the mobile about the child's bed, as the bed is for sleeping (and rest) and the mobile is for work. You'll often see mobiles above a movement area, a soft mat or blanket next to a wall mirror, however, the mobiles do not need to be near or against a mirror to fulfill their purpose.

I would place the mobiles above the infant, initially around 30cm above which is approximately the distance a newborn can see. The mobiles should be in front of the child, above their chest so they can look forward at the mobile, not directly above their face, this is so the child can choose to look at or use the mobile or not, it is easy for the child to look away and focus on something else if they are not interested. We've used hooks on the side wall (I've also used a piece of washi tape) to be able to hook the mobile to the side, out of the infant's line of sight, so they can also use the space without using the mobile.

By observing the child you can determine when the child has finished with the mobile and you can then play or move onto something else. As with any of the children's work, try not to break the child's concentration or interrupt. We want the child to feel fulfilled, to finish their work independently. You will need to rotate mobiles to keep the child's interest. If the child is bored with the mobile or doesn't engage with it at all, it's possibly time to put it away and try another mobile. We try to keep the mobiles developmentally appropriate which is why we start with the Munari or other black and while mobile and then move to other colours and shapes and then onto tactile mobiles.

I try to only put my children under a mobile when they are well rested, fed and able to concentrate. I don't have any expectations, sometimes my newborn will spend five minutes under the mobile and other times he has stayed there happy for up to forty minutes. It's also nice to have the mobile moving so I usually open a window so the mobiles can move gently in the breeze. 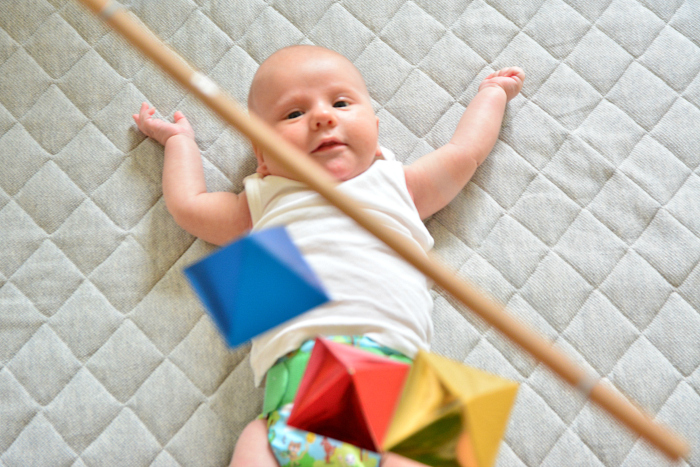 You can read all of my previous posts about Montessori infant mobiles here including all or our mobiles and lots of mobiles by other families. For more ideas and inspiration have a look at some Montessori Mobiles on Instagram! Above Otto is gleefully using and already batting at the Octahedron mobile.