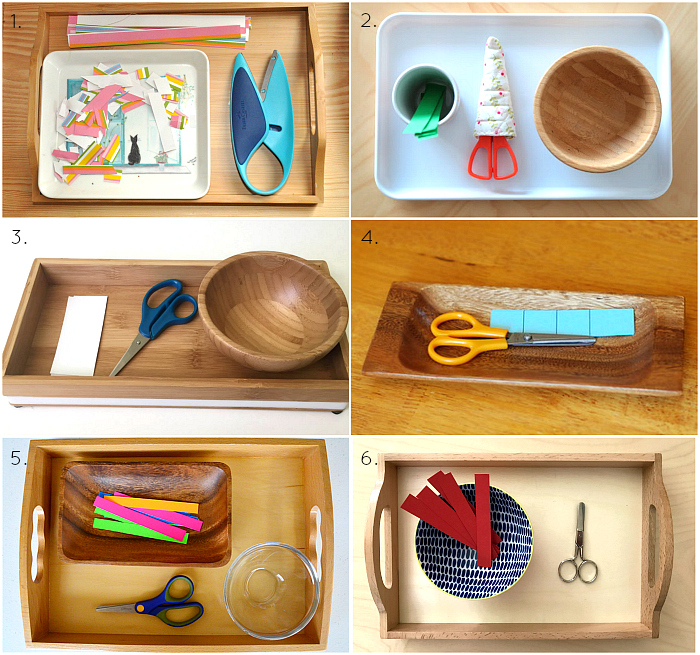 Chatting to teachers and friends it became clear that everyone has their own type of scissors they prefer for toddlers. I looked around online and found the same thing. Even with Montessori toddler teachers, there wasn't a consensus on the best type of scissors for the first cutting tray. So today I'm sharing a few articles from others showing their first cutting trays and sharing the scissors we've used. Some parents and teachers prefer the spring back and open scissors many prefer the little nail scissors with the round tip.

My first two children used the Staedtler Children's Scissors but out of interest I've ordered and are using the Nienhuis scissors with Otto. As Nienhuis are so well used in the Montessori community I wanted to know what they were like and if they would make the learning to cut process easier. The Nienhuis scissors are the same size as our little round tipped nail scissors but are much heavier and solid, they have a longer blade too so they cut more paper.

In our First Cutting Tray, we also have some card, just heavy enough that it stays straight when being held by the child. We want the card around 1cm thick, so it's easy for the child to cut through in one snip. For the first cutting tray, I don't worry about using lined card as the child is at the start of the learning process and will cut anywhere. We also want to provide a little bowl or tray for the paper snips to go into. As much as possible we also set up the tray so the child/activity moves from left to right.

Two other excellent resources include:

If you have older children you may like this article Montessori Scissor Work Ideas. Please feel free to provide your suggestions or share which type of scissors you've used with toddlers, I'd love to hear.