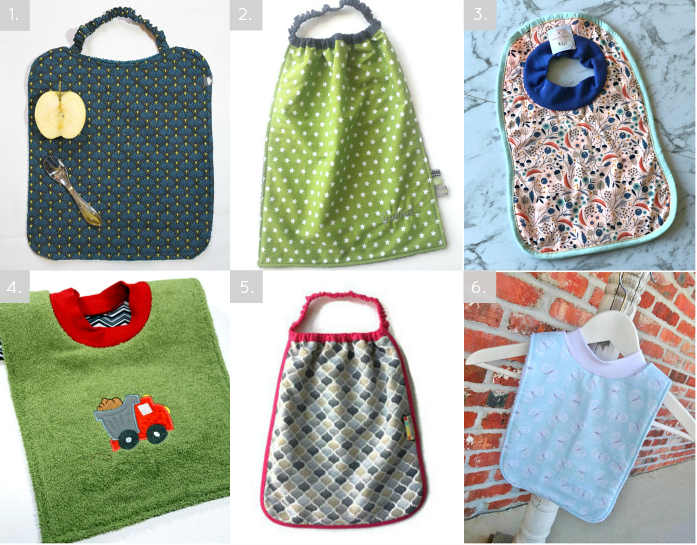 When I think of Montessori bibs I think of the traditional bibs made in Montessori training like this one. When Otis (my middle child) was weaning I handmade some similar, with the velcro closure on the side. But since having Otto I've found a whole range of bibs that also fit the Montessori requirements. Some of these are even easier for the child to put on independently. The three style of bibs that I've found easiest for the child to use include:

Bibs also need to be soft and comfortable, not irritating to or rough on the child. Some of these are made of towelling or have a towelling back allowing them to be soft and absorbent. Otto doesn't always like to wear his bib, but will when eating something messier like yoghurt, soup, stews, or pasta when there is a lot of sauce. Otto could take his bib off indpendently at around 8-9 months and he could put it on independently at around 12-13 months. We hang his bib on a low hook near his snack area and at 18 months he can independently get the bib, pull it on, eat his food, take it off and put it away back on the hook.

Pictured above Otto is using this bib with an elastic neck. It has toweling on the back so it is thick and can absorb spills. The elastic neck also makes it easy to hang on a low hook. If you are in Australia have a look at these adorable designs for the pull over bib. Freedom Bibs are made in New Zealand by a Montessori parent and look easy to use.

When Otis (my middle child) was weaning I made all of his bibs by hand, using a pattern from a friend, you can see him wearing them here. Recently I found quite a few patterns online that could be useful: