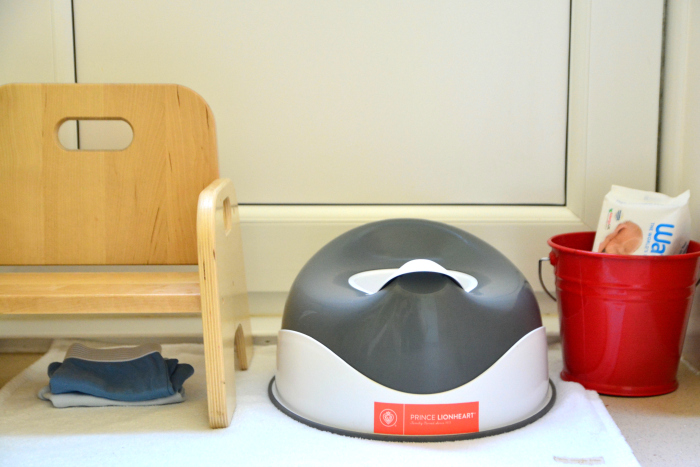 Otto is now completely nappy free at 22 months. Over the last week, we've moved from nappies at night to one hundred percent in underwear. He was wearing a nappy at night but I found that he was dry almost all of the time. I started offering him the potty first thing in the morning and now he goes there himself as soon as he wakes so we stopped using nappies completely. So far no night time accidents. Otis (now 8yrs) was also completely nappy free at 22 months. How is it done? I followed the Montessori method of toilet learning.

What makes Montessori toilet learning different, is that it follows the development of the child and it is respectful of each child. It is gradual and at the child's pace. Previously I have published a parenting handout from Forest Bluff School (with permission) on Montessori toilet learning. I have republished this handout below. I hope it is useful! If your child/toddler attends a Montessori school, ask if they have any parenting or toilet learning handouts or if they run any workshops or information sessions on the topic. It's best, if possible, to read up on the topic while your child is still in infancy.

Indirect preparations for toileting
When to begin toileting
Between twelve and eighteen months is the sensitive period for beginning toilet awareness. It can begin sooner or later, depending on the child. Look for signs of readiness:
Sometimes a child exhibits none of these signs but will become interested as soon as you begin to draw her attention to toileting, so we still recommend beginning before 18 months.
Equip for toileting success!
Once you begin toileting
These first three points are the most important, because they have to do with drawing your child's attention to this part of our daily lives:
-------------------------------------
Every parent will find their own way on the toilet learning journey. We have a plane ride coming up so while I feel nervous regarding pubic accidents I'll be considering this advice. We are currently living in a small home, so our potty is not in the bathroom but nearby. If you have any specific questions on our toilet learning journey, please feel free to ask in the comments.
Some of our previous toilet learning posts can be found here:

Other Montessori toilet learning resources you might find useful:

"A common misconception is that there is a goal in mind in that it's just an end product and that it should happen by a certain age which is not true, in terms of any acquisition any development a child is doing. For example with walking, a child can walk between 8 and 18 months, so there is a broad range in terms of when this acquisition is going to happen and it's same thing with toileting. It's a process there is preparation for and it will happen eventually and it needs to happen when the child is ready. It will happen when he decides not when the adult decides... With toileting we can offer, we can ask the child 'would you like to' but if he doesn't want to we can't make him. With choosing that work that might mean he might do part of that work. That happens commonly with toddlers, that they might only do a part of a cycle of work... and it might be the same with toileting they might only take their underwear on and off... it also might be a long process." - Toilet Learning from Montessori Guide.

This post includes affiliate links. We may earn a small commission on products purchased through these links. Thank you for your support.