Shopping with Kids - Using a Visual Shopping List + More
I Made A Felted Play Mat! A DIY Ocean Playscape.

In the kitchen with a three-year-old. Practical life in pictures. 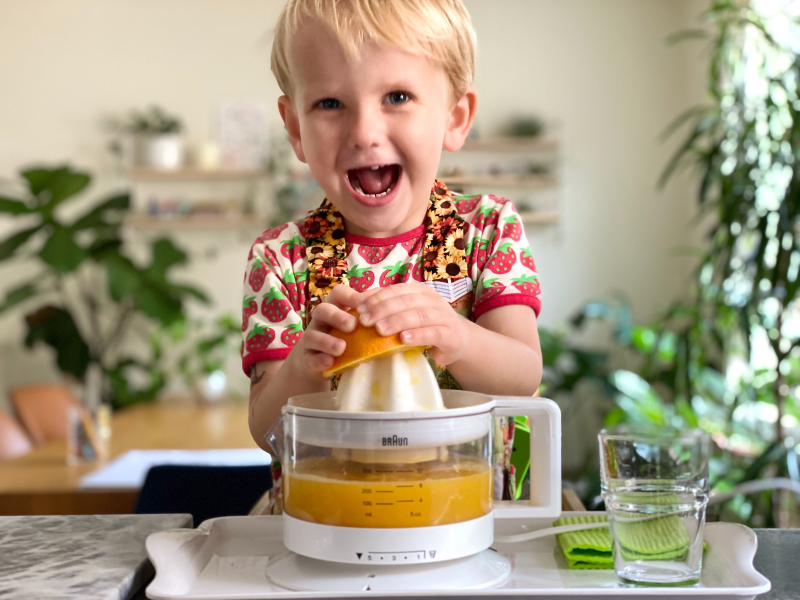 Today we spent a lot of time in the kitchen so I thought it would be a good opportunity to share some practical life work.

Above Otto is using an electric juicer. This is super efficient compared to a manual juicer. The child needs strength to hold the orange and press down. When pressure is applied to the juicer it rotates to juice the fruit. It's also faster than using a manual juicer, Otto can easily juice a bag full of oranges. 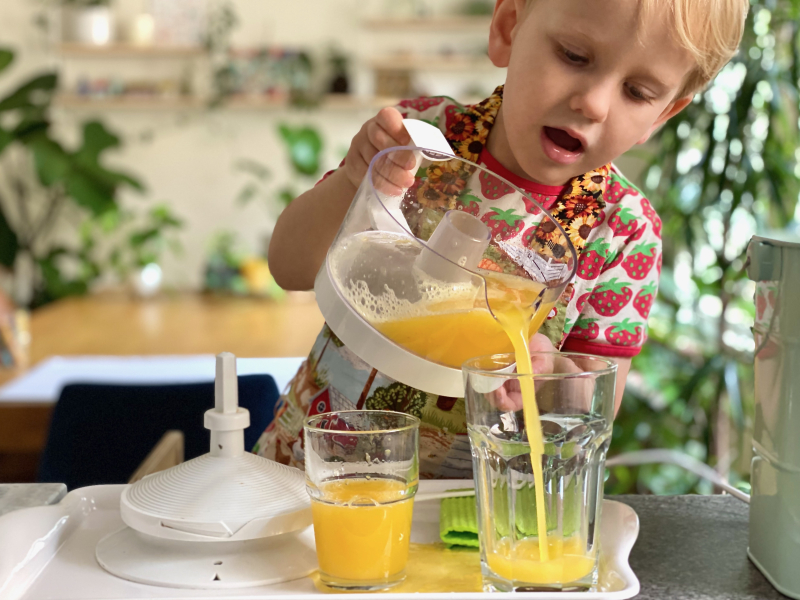 The pouring part is a little tricky. Remember to have a small sponge nearby. 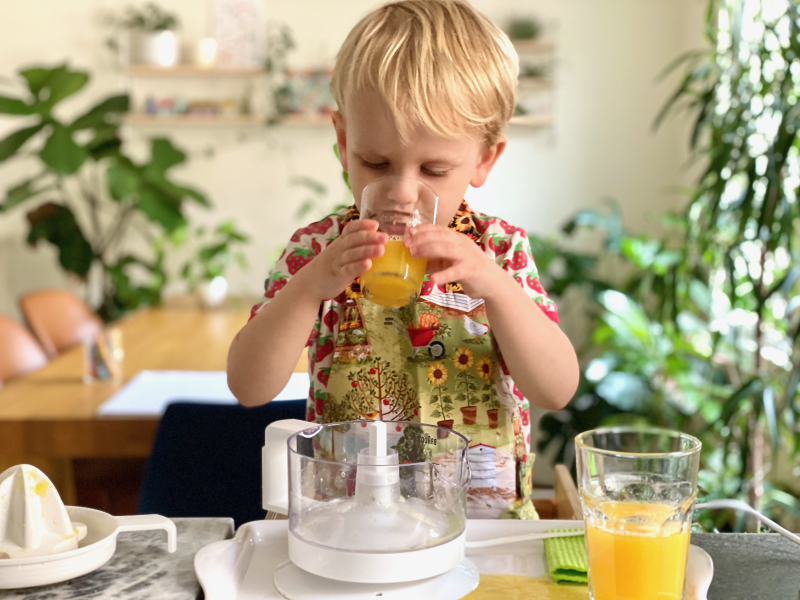 A tasty treat and there is enough to share! 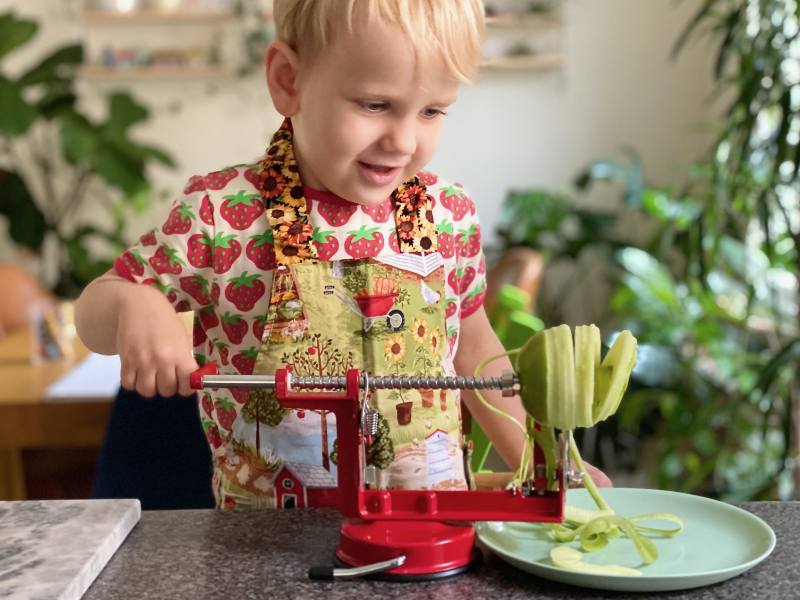 Then we set up the apple slicer and corer. Above I forgot to adjust the setting so it also peeled the apple. In the kitchen, Otto is 100% supervised so if he didn't want to slice apples I would have left the slicer and a couple of apples out, so it was still there if he wanted to use it later. 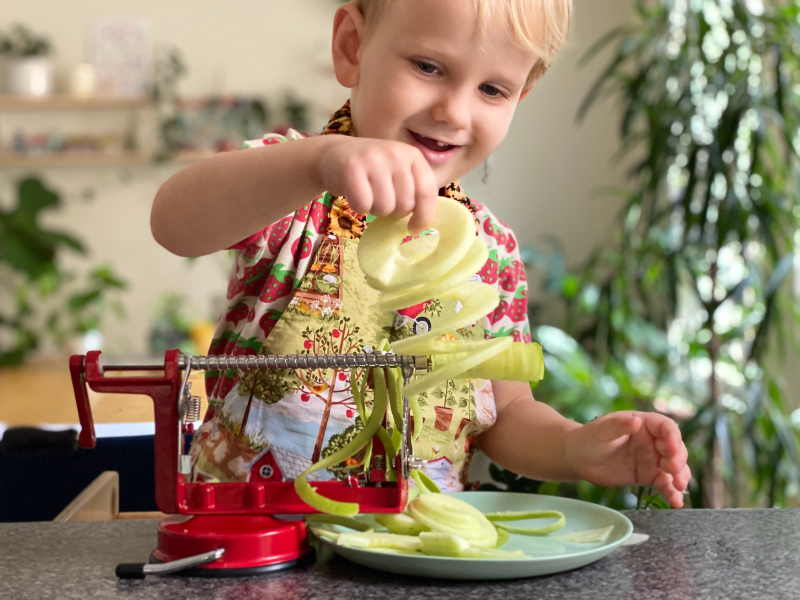 This never gets old. 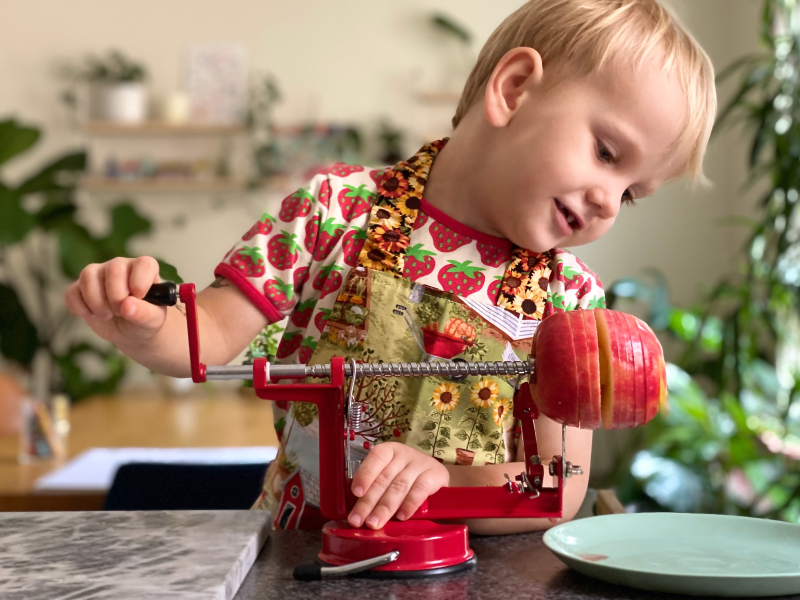 We sliced red apples too. The suction on our slicer is pretty good but if the child needs to support it, they can hold the base. This is fantastic work for building core strength. 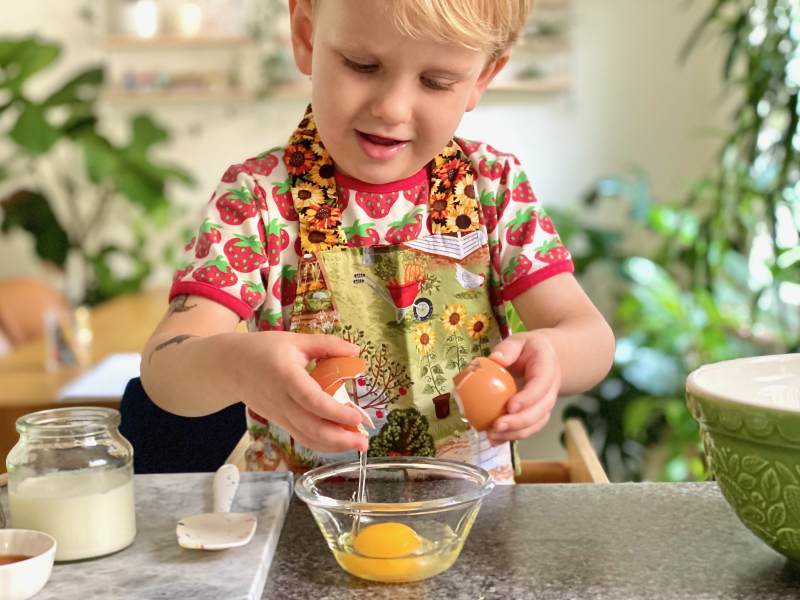 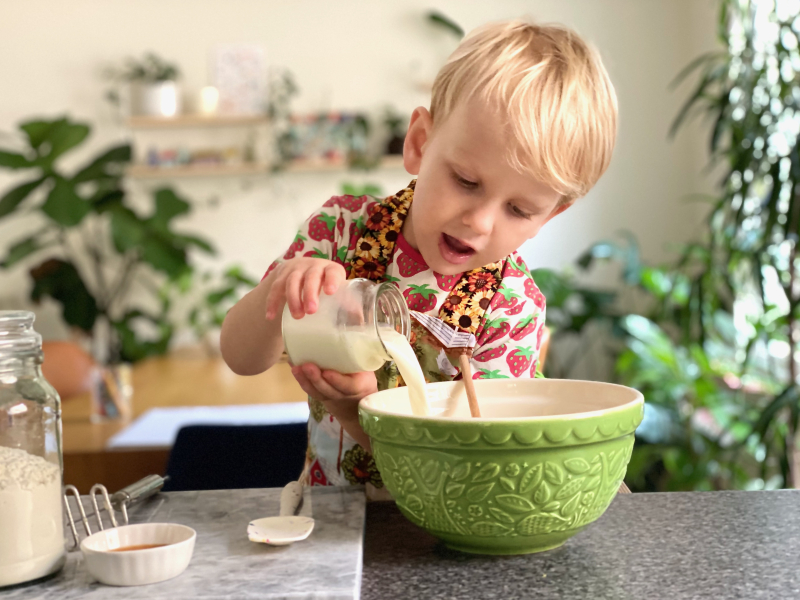 I've pre-measured the ingredients so all Otto needs to do is mash, pour, and stir. 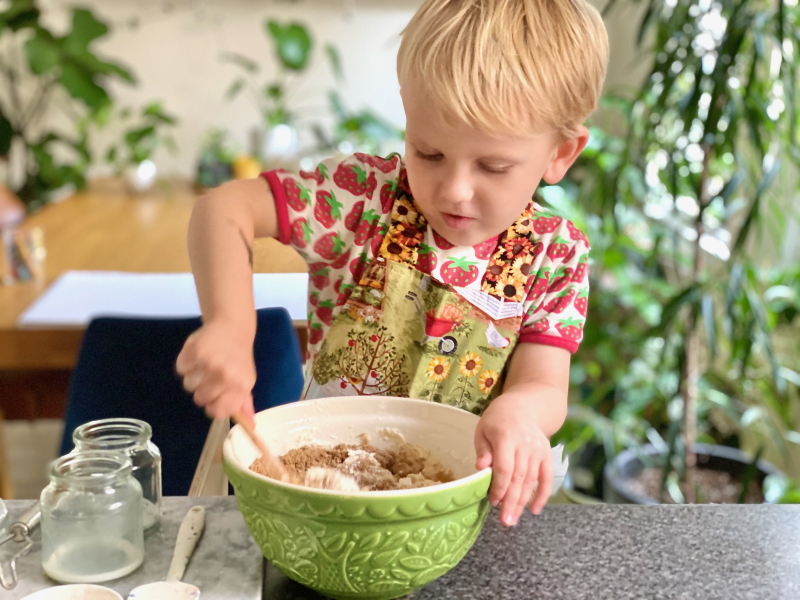 Stirring and mixing ingredients can be difficult for children, it takes a lot of strength. I encourage Otto to hold the bowl close to his body and to hold the bowl with his supporting hand (his left). If your child is struggling to mix things together, I suggest letting them try for as long as they possibly can, each time it gets easier. 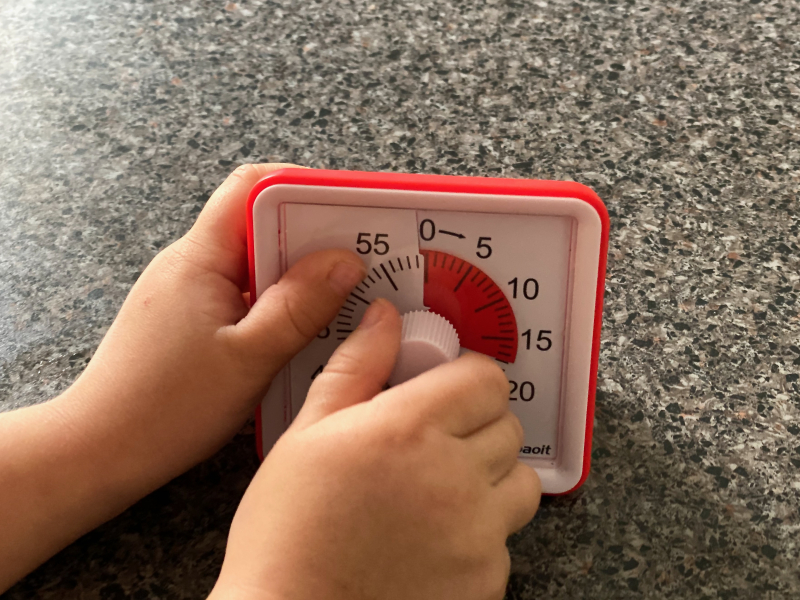 We put the banana bread into the oven and set the visual timer. We like to use the visual timer as it's easy for the child to see how much time the food has left in the oven. 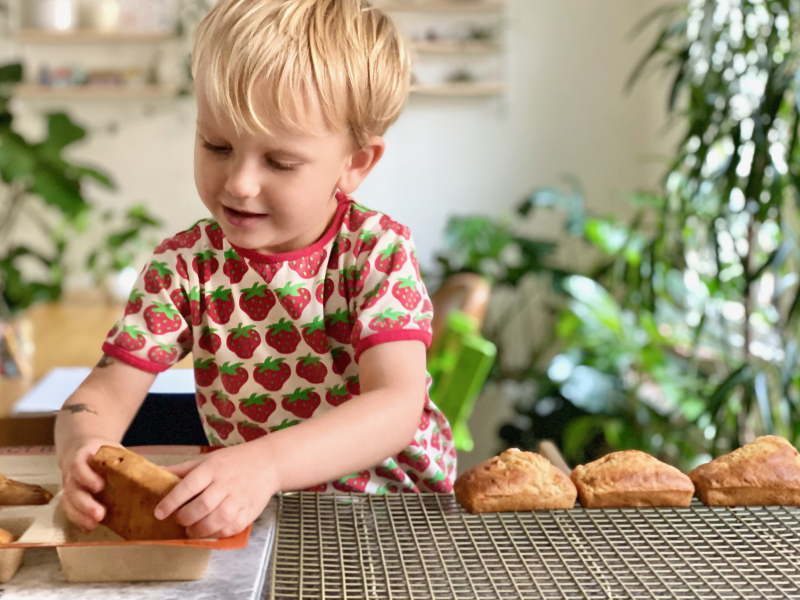 The banana bread has come out of the oven, it's still hot. Sometimes children want to see what they are capable of and test themselves. I would have waited until they cooled down but I allowed Otto to use his sense of touch and get them out of the baking pan. 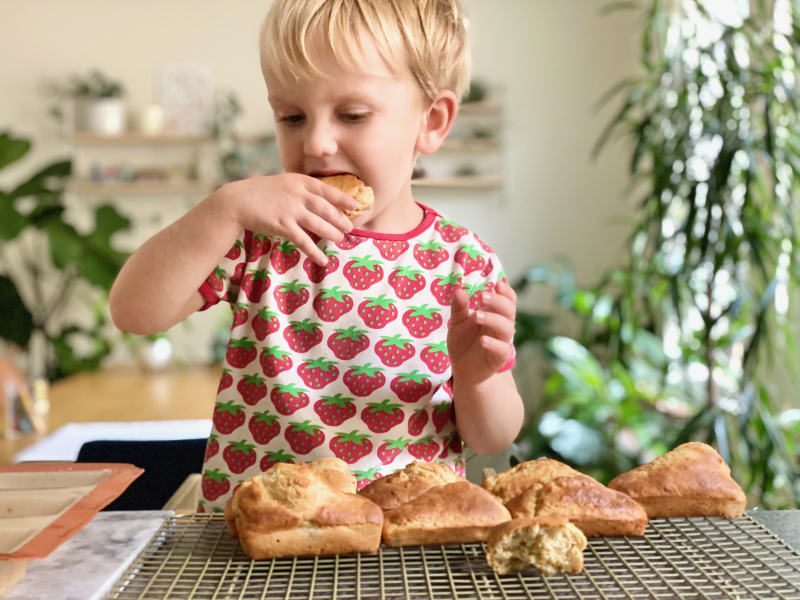 I always allow the children to sample food when they like (as long as it's safe), it natural to want to taste, and at this age, they can't resist. 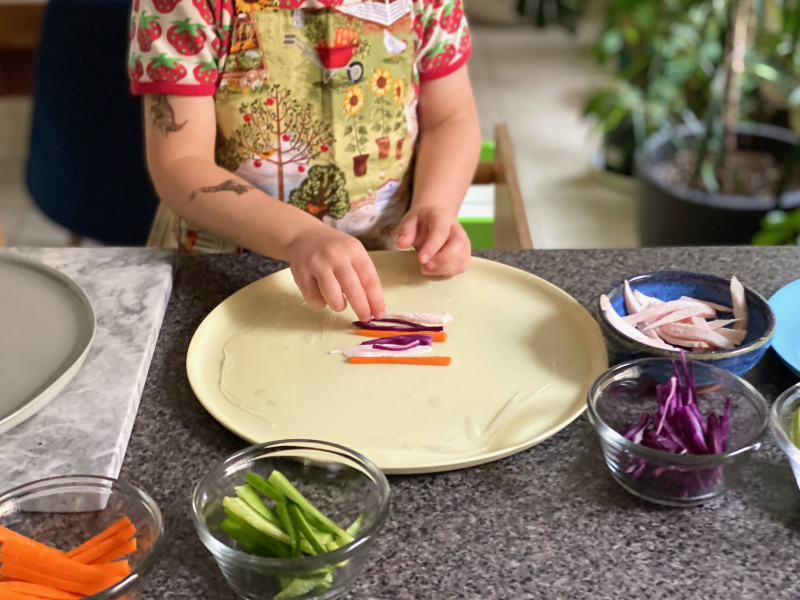 Time for lunch and we made some vegetable and chicken rice paper rolls. I made some opposite Otto so he could see how to make them. Working alongside the child means we can show the child how to make them, not tell them. They can also keep on looking and use us as a reference when needed. 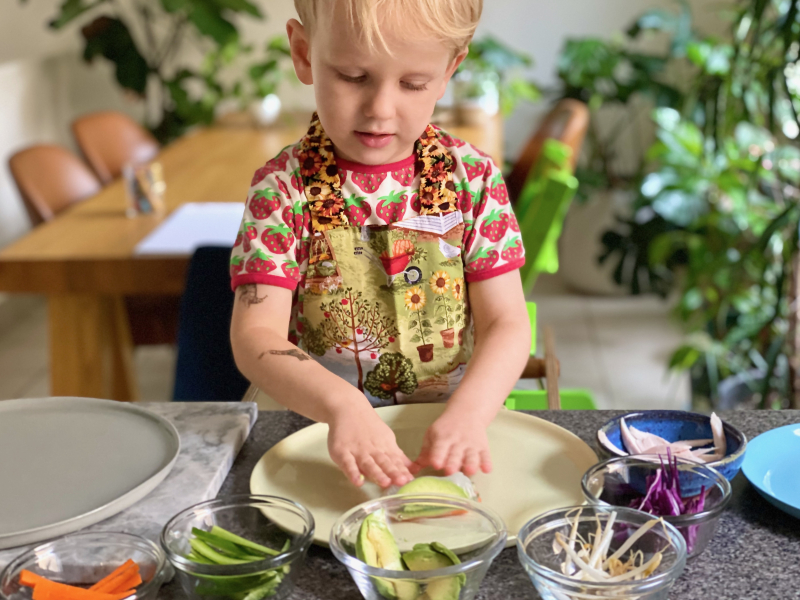 He needed a lot of help folding them but it's worth it allowing the children to do as much as possible. He also sampled a lot, but that's ok with me. 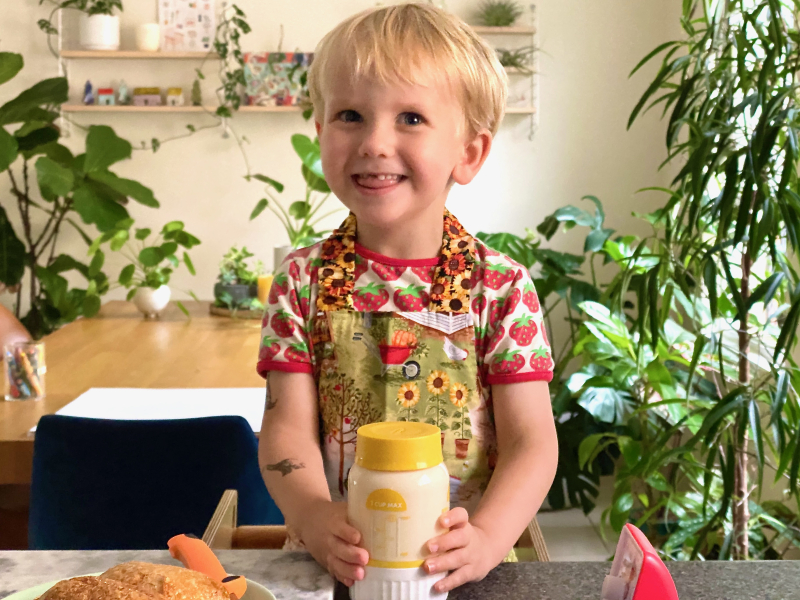 Much later in the day, we made some fresh butter. We started with a cup of cream which we got out of the fridge in the morning, it needs to be at room temperature. We put the cream into the butter maker and shake it. 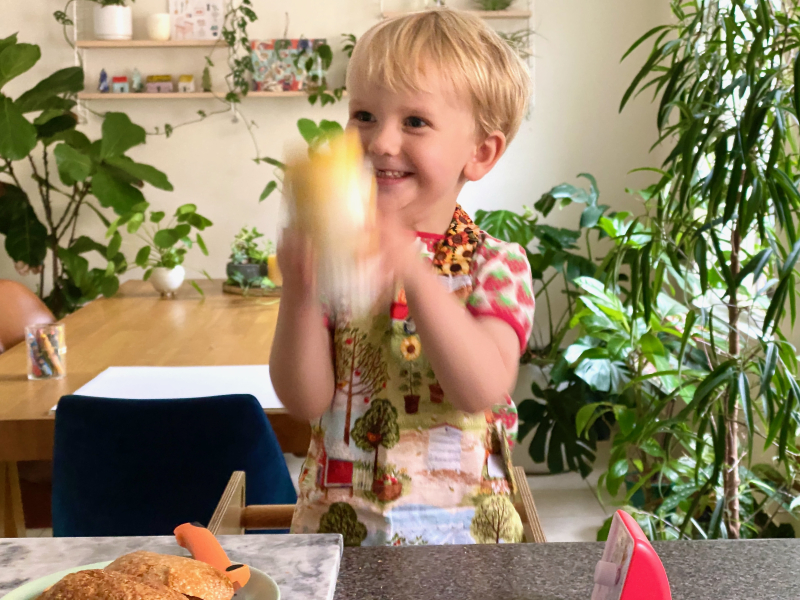 Luckily Otto had his two brothers around to shake it too. It's hard work. We set the timer and we ended up shaking for around five minutes total. It is too much for a preschooler to do on their own but if everyone in the family or class has a go, it's doable! You don't need a special jar to make butter, we've also made butter before using a baby food jar and a marble. 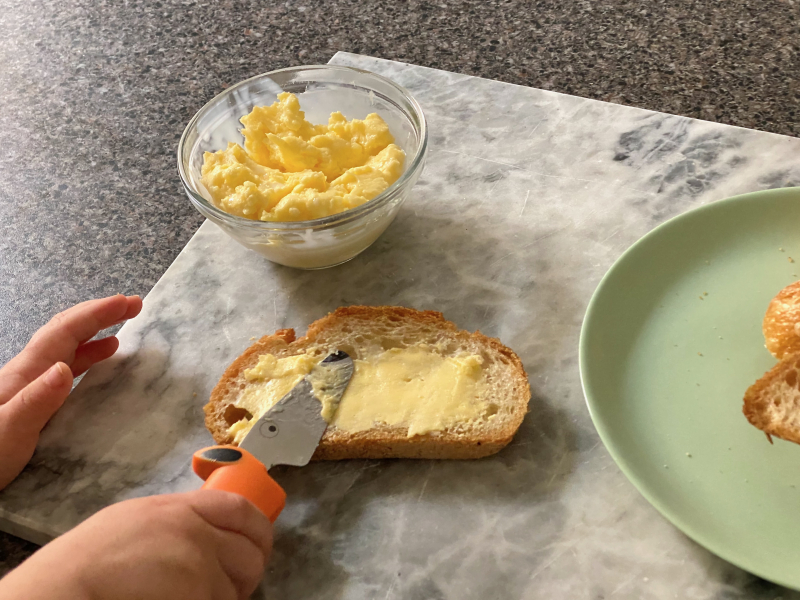 It's like magic! The cream turns into tasty butter.