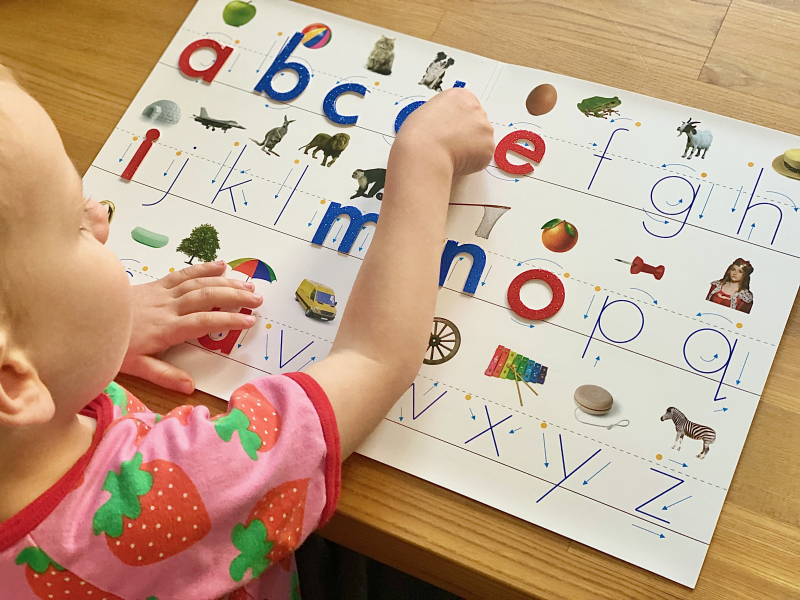 My three-year-old doesn't attend a Montessori preschool (yet!) so he is doing all of his schooling at home. While we have some traditional Montessori materials like Sandpaper Letters, I find myself reaching for additional activities that will appeal to him.

In the classroom, children are influenced by their peers and will often choose work that they see other children using. At home, we don't have that option. I will give my child multiple demonstrations and I often do the work with him, but we also try a few activities that aren't traditional Montessori but are still generally aligned with my Montessori values.

I decided to try the Multi-Stick Sandpaper Letters (AU, also here) (US here) and it was the biggest hit, I have to share it. 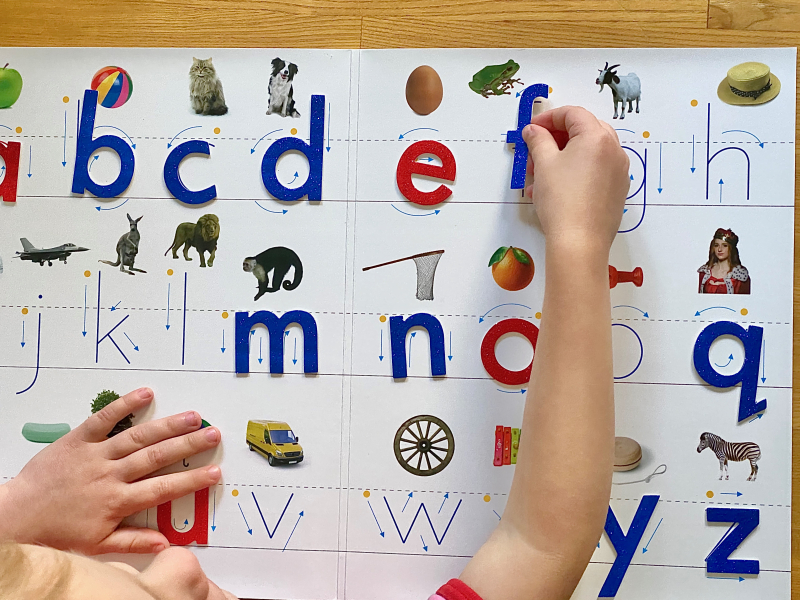 The child is presented with a sheet of letter stickers and a board full of letters and pictures. The child chooses a letter sticker and sticks to it the corresponding letter on the board. 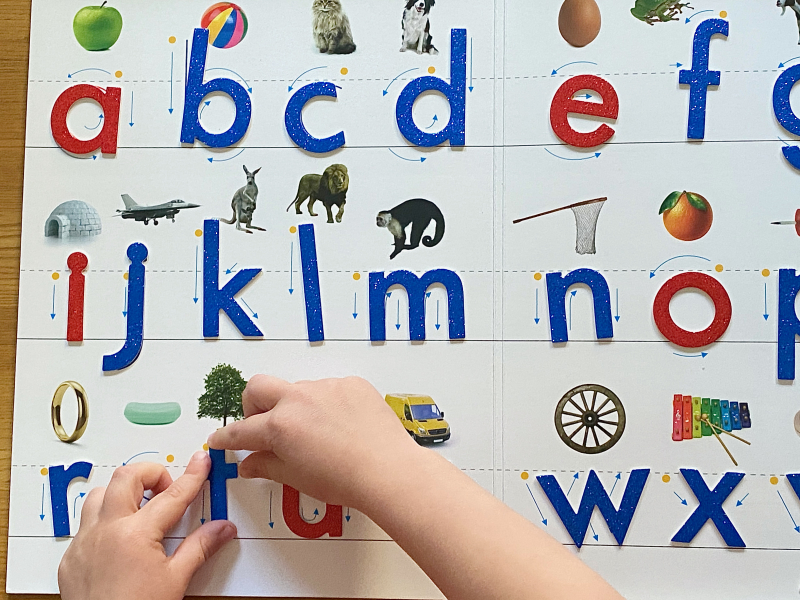 The letters are multi-stick. We are careful and don't allow the letters on the carpet or on a dirty table and after weeks of use, the letters still stick perfectly. In theory, we could also use the letters on another board to make cvc words, although we only have one of each letter. 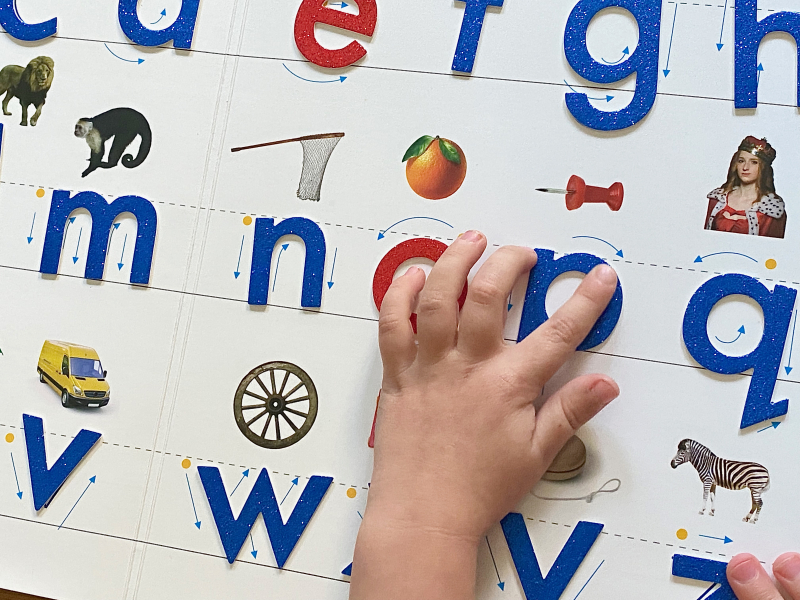 The board has a dot where to start the letter and arrows for the child to follow. The letter stickers are not sandpaper, but they are glittery and textured. They are softer (and nicer) for the child to touch than sandpaper letters. The child still has the lovely experience of feeling the letters.

The best part is that my three-year-old uses it 3-4 times a day. It's easy to carry around. Sometimes he will use it at the dining table while I'm finishing preparing dinner or while his brothers are doing school work. We use it a lot and it's helping him to learn letters he doesn't know and reinforces knowledge of letters he does know. 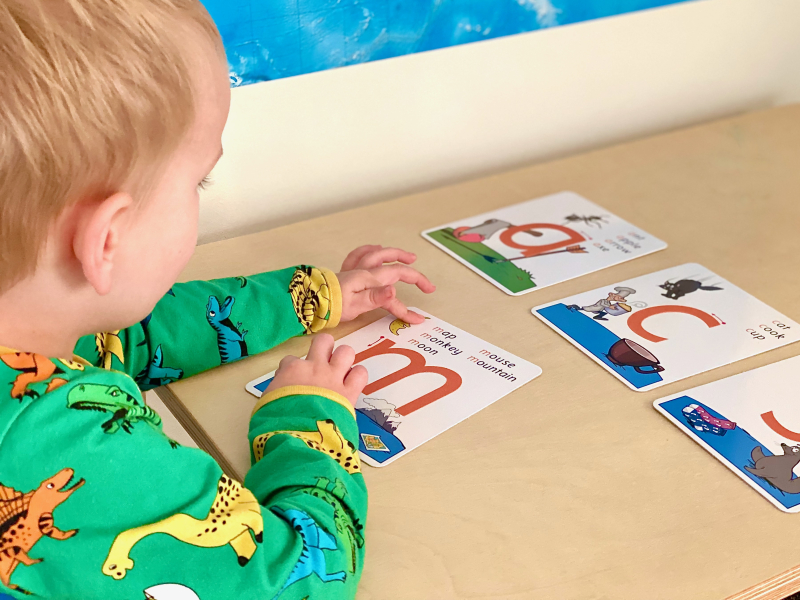 These are the Let's Feel Sandpaper Letters (AU) (UK here). I wanted to try these as they look fun, and I wanted to try them before recommending them to others, I talk to families who are looking for learning materials that aren't necessarily Montessori materials. I find it hard to recommend or even suggest items until I try them for myself. So these were super interesting to test out.

The sandpaper letter (and it is sandpaper) comes separate from the letter board. You need to stick the self-adhesive letter on the board before it will look like in the pictures above, it only takes five minutes or so to do.

These are not the traditional Montessori sandpaper letters. But my three-year-old enjoys using them. The illustrations make it heaps easier for him to guess the letter sound, if it's a letter his not 100% sure of, but sort-of knows. We definitely find them useful and my child is drawn to them. 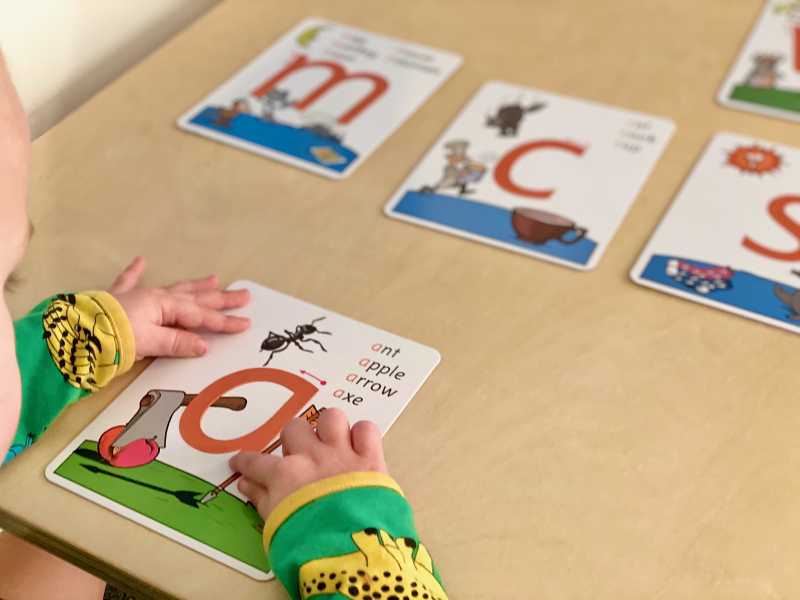 The sandpaper letter is real sandpaper and the board is thick/heavy cardboard. Some of the illustrations are cartoony but none of them are (to me) too over the top or offensive. If you are looking for an alternative to Montessori sandpaper letters, these might be an option for you. The child still has the benefit of 'feeling' the letter and knowing the shape and form of the letter while learning the sound of the letter.

I hope you've enjoyed a peek into these alternative sandpaper letter ideas!