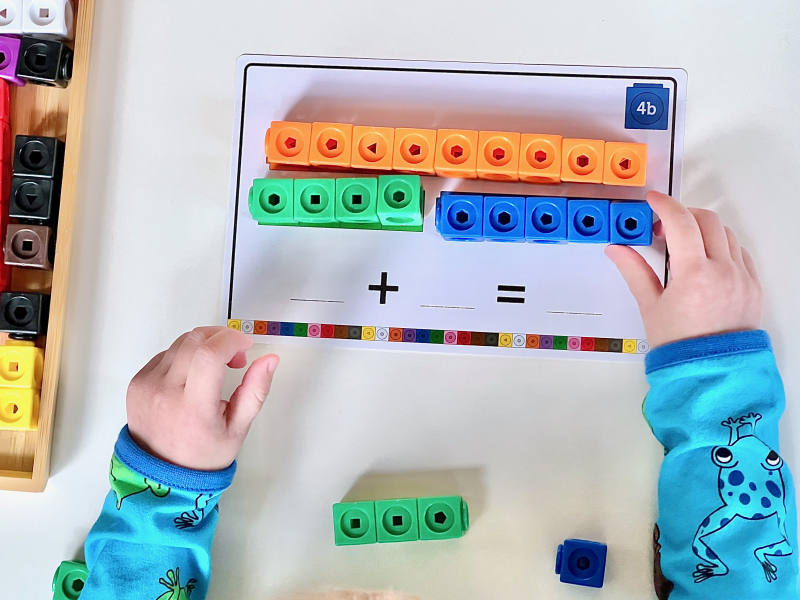 My four-year-old is obsessed with addition. Out of nowhere, he will start quizzing me "what's 4 plus 4?" and before I can answer "what's 3 plus 5?". If your child attends a Montessori school they may use the Montessori Addition Strip Board. And there are tons of ways we can practice addition in everyday life. We can practice addition with our children when shopping "we have two oranges, if we get two more how many do we have?", when putting away the shopping, when washing, playing shops, playing with blocks, on nature walks and so much more.

Addition is a fundamental math skill and we want the child to commit basic addition to memory. We want the preschooler, or kindergartener to know that five plus five equals ten, without having to use counters or count with their fingers. The way we can achieve this is with lots and lots of practice.

My children get turned off easily with prepared activities so I started to think about maths games that are fun, use hands-on materials and can be played with others. I found three stand-out games that my preschooler will freely choose and that involve lots of maths.

The first is the Learning Resources MathLink Cubes (AU here, UK here). It consists of blocks that click together and activity cards for the child to use. There are 30 activities on 15 double-sided cards, but there are lots of other activities we can do without the cards. They also have themed sets (which I wish I had ordered instead) including MathLink Dinosaurs. Best of all the blocks can be used for free, open-ended play, the blocks can click together to build shapes, towers, robots and whatever you can imagine. 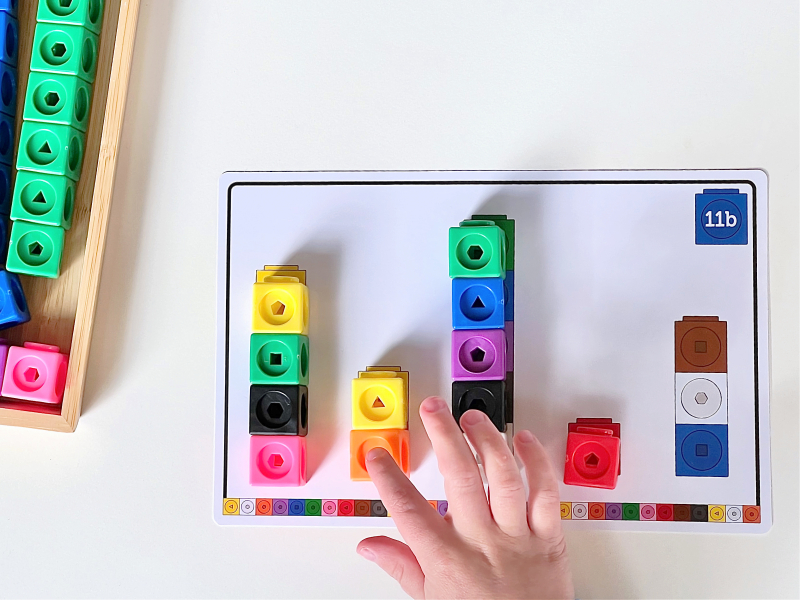 The MathLink cubes can be used for learning addition, subtraction, colours, sequencing, patterning, matching, length, height, more than/less than/equal to. I would not recommend the cubes for preschoolers with low muscle tone, the blocks require a bit of pressure to squeeze them together. For all other children, the blocks would be a good way to work the hands and strengthen finger and wrist muscles. 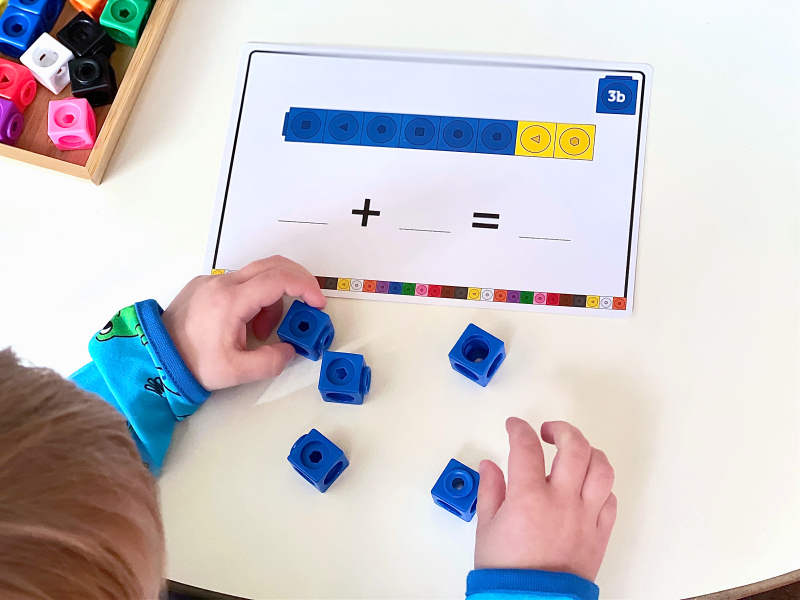 I put 4-5 (double-sided) cards out and allow my child to choose which card he wants to work with. I present this on a tray with all of the blocks. 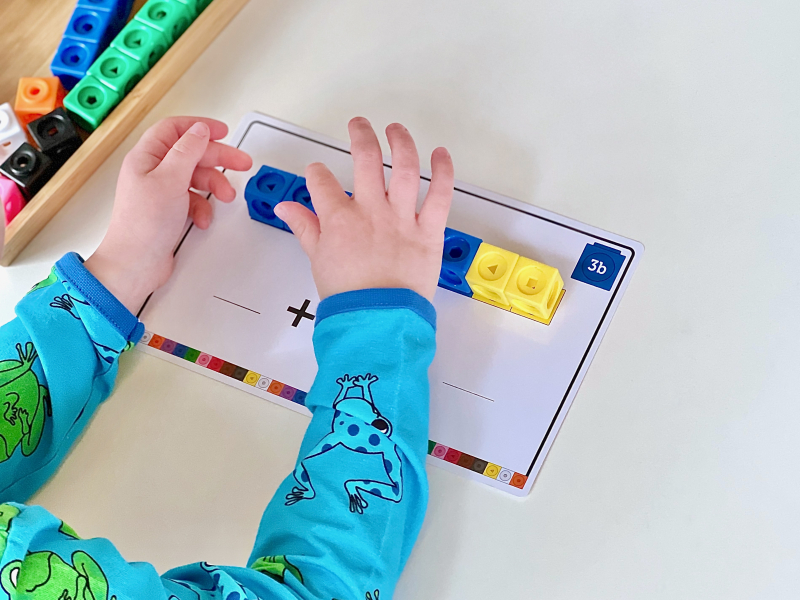 The cubes give a little satisfying click when they connect together. This is a lovely visual way to practice addition. 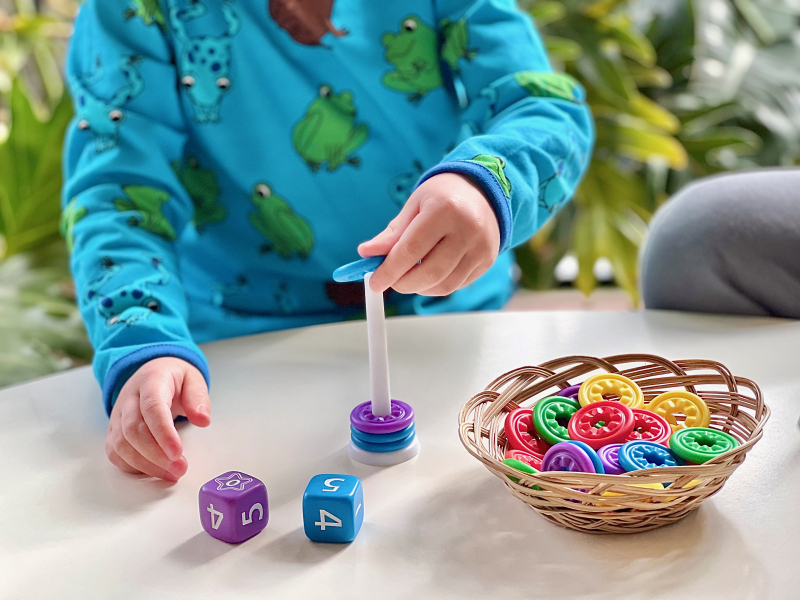 This next game has been a huge hit and I will be recommending it to everyone. It is designed to be played with two players however my child also enjoys playing this on his own.

ThinkFun - My First Math Dice (AU here, UK here) is simple, affordable and fun. It comes in a small travel pouch so it's also good for travelling, taking on picnics (if your children like that kind of thing!) or in our case, taking to your brothers' sports training.

It comes with two towers with coloured chips and two chunky dice. Here Otto is playing with his brother Otis. They each have a tower and they take turns rolling the dice. The child rolls the dice and adds the numbers together. Then the child adds that number of chips to the tower. The person who fills their tower first wins.

It is an early maths game that uses concepts like recognition of numerals, more than/less than, and basic addition. 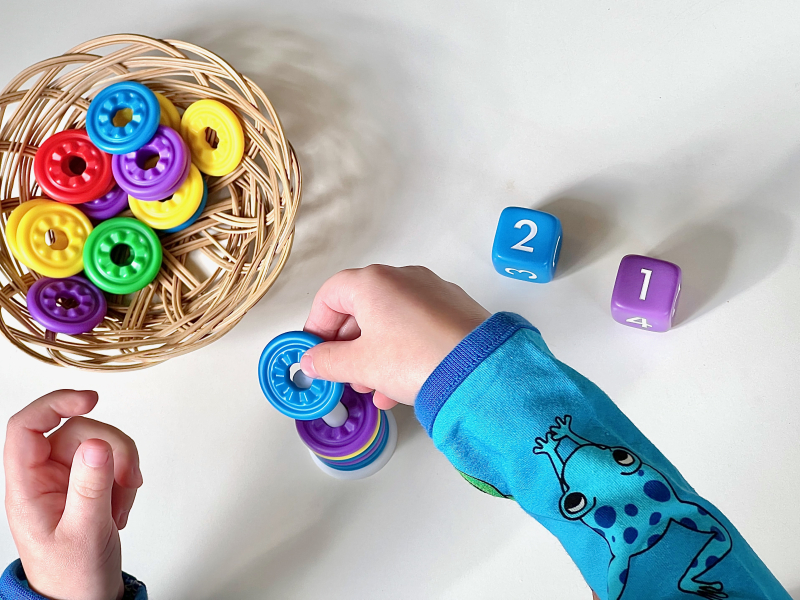 Otto rolls the dice. He uses simple addition 2+1=3 and adds three chips to his tower. 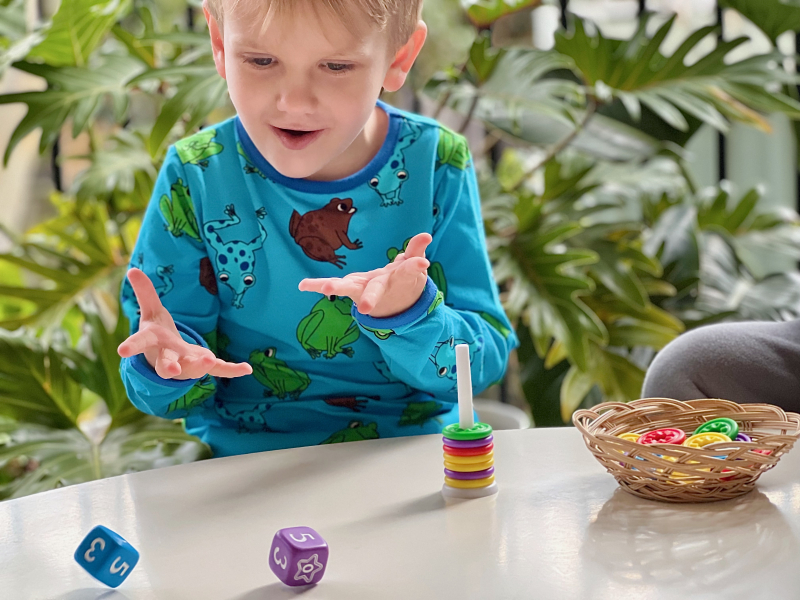 I find preschoolers love games with dice! These dice have a 0 on them so the addition is of numbers up to five. Perfect for children still counting with their fingers. ❤️ 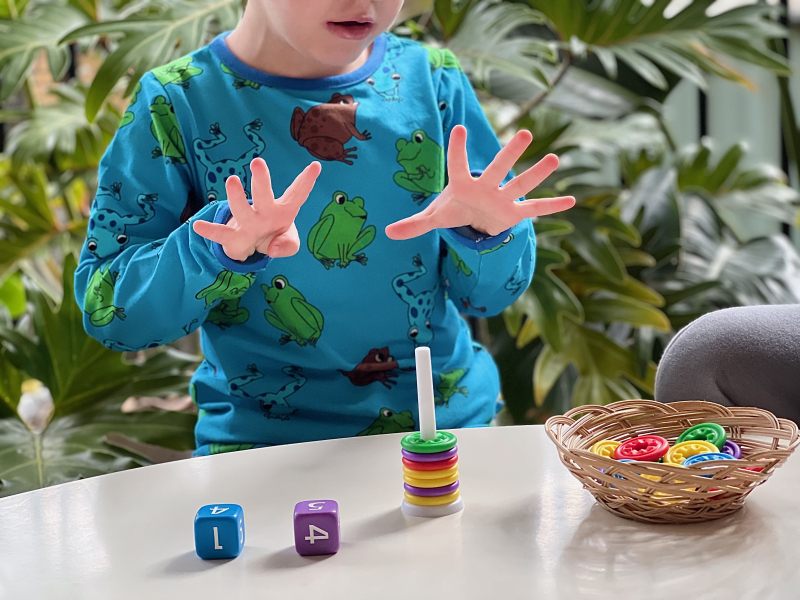 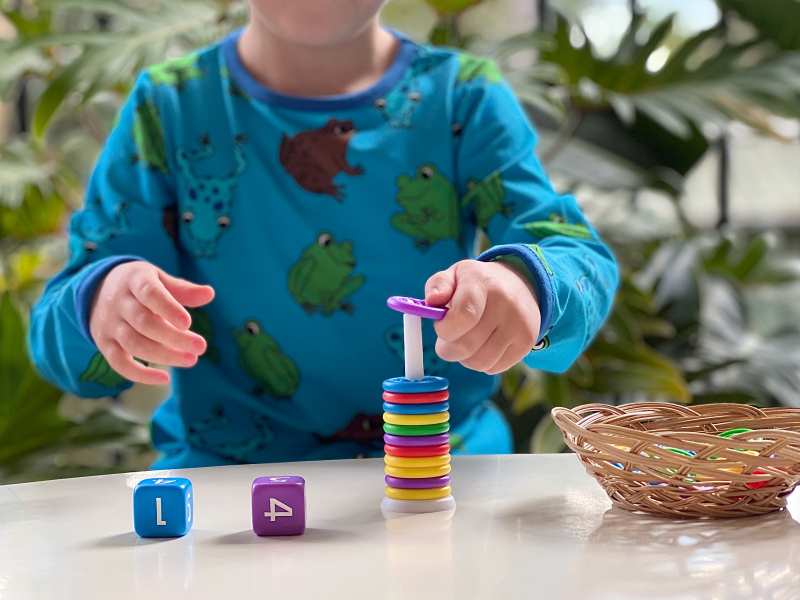 ThinkFun has a few other maths games which I will be looking out for. 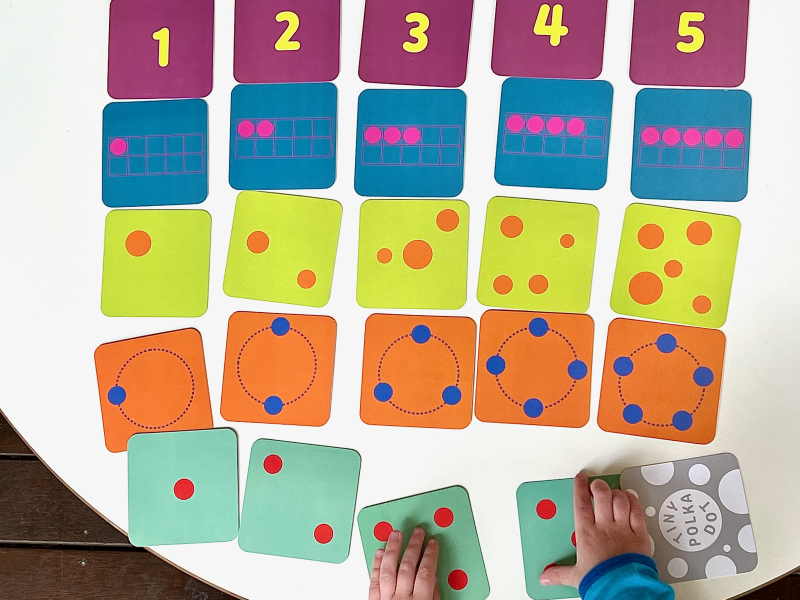 The next game is splurgy for a set of cards but I was curious. Tiny Polka Dot (AU here, UK here) looks at numbers and how different collections of dots represent the same number. This goes beyond what we typically teach young children about numbers, especially when in educational settings children are often counting counters or objects of the same size/appearance.

Tiny Polka Dot is also good for practising subsidising, the ability to recognise a number of objects without having to count, like how we recognise the pattern of five dots on dice as the quantity five, without counting the dots, or the numbers of dots in a ten frame.

The cards include the numbers 0 to 10 in five different formats. The pack comes with 16 suggested games. 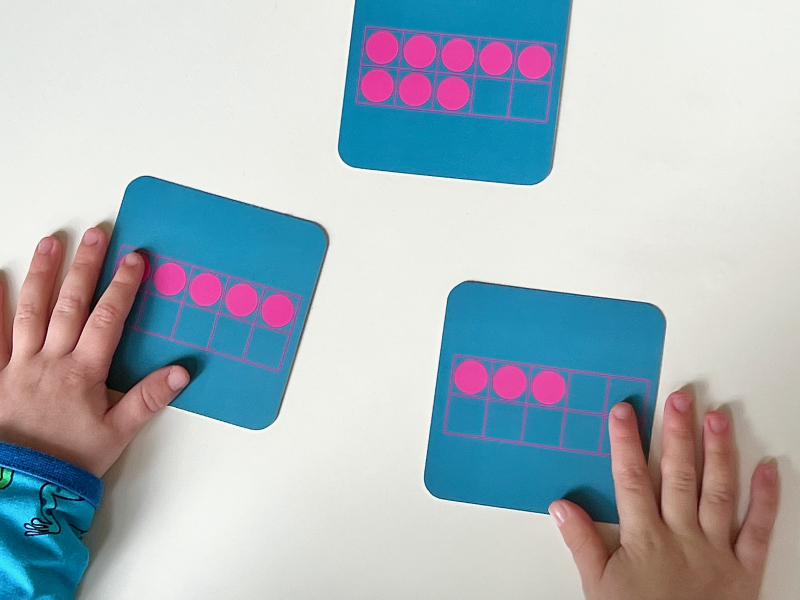 This post includes affiliate links. Thank you so much for your support!