New books to read! About gender, pronouns and disability. ❤️
What are the benefits of indoor climbing equipment?

How we are using the Montessori Sandpaper Letters 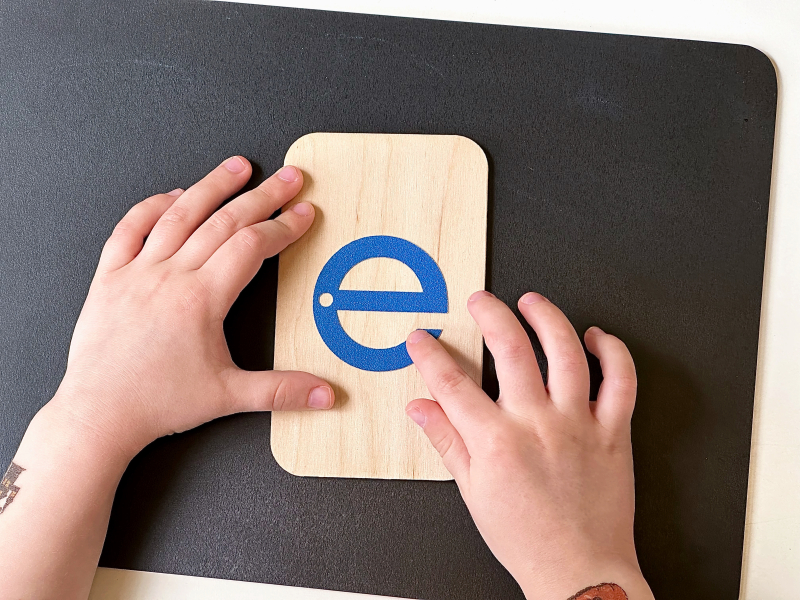 Sandpaper Letters are one of the most used Montessori materials in our home when my children are between the ages of three and five. Some children tire of them, but we still have them on our shelves, and Otto works with them periodically.

It is important to say we do tons of practical life (including cooking, cleaning and handwork like sewing) and art (including playdough, clay and using scissors), so there are lots of other ways we assist our children in developing fine motor skills required for holding and controlling a pencil.

We have used a few different variations of Sandpaper Letters, depending on our location and their availability. The Sandpaper Letters we are currently using have red consonants and blue vowels in print on a birch board.

What are the Montessori Sandpaper Letters? They are letters of the alphabet cut out of fine grit sandpaper and glued to a board. The child feels the letter and develops a muscle memory from forming the letter, and can then later form the letter in a sand tray, on a chalkboard or on paper.

"Tracing the letter, in the fashion of writing, begins the muscular education which prepares the hand for writing... The child who looks, recognizes, and touches the letters in the manner of writing, prepares himself simultaneously for reading and writing."

"Touching the letters and looking at them at the same time, fixes the image more quickly through the co-operation of the senses. Later, the two facts separate; looking becomes reading; touching becomes writing." 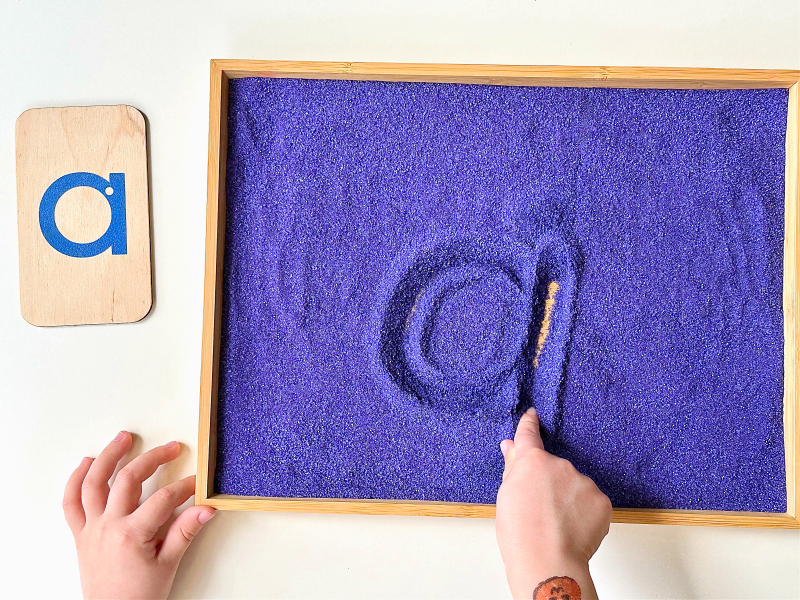 Using the Sandpaper Letters with a sand tray. The sand tray is useful as the child can really feel how to form the letter, and it's easy to give the sand tray a little shake and write the letter again. We started using the sand tray at three years making prewriting lines and shapes. 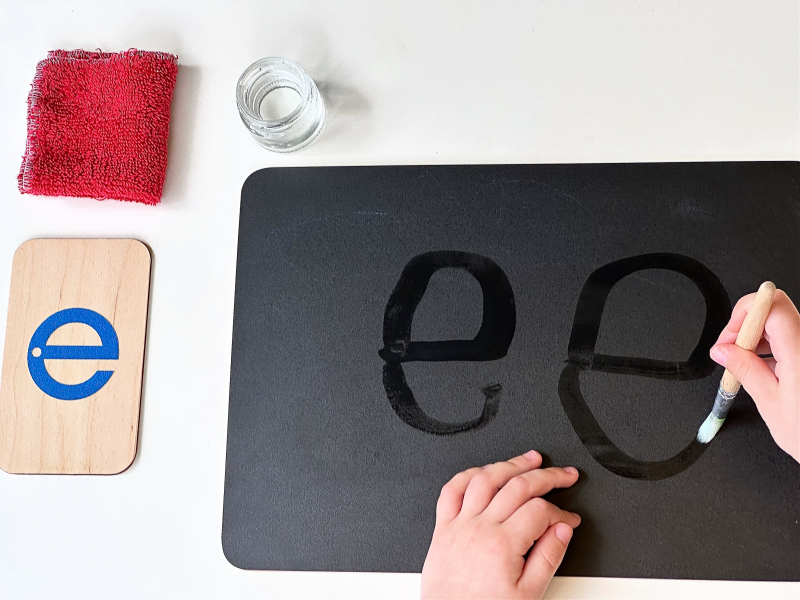 We can move on to the child writing the letters with an instrument. Here Otto is using a paintbrush and water on a chalkboard. I like this much more than I was expecting, the water really flows onto the chalkboard, and it's a fun and different way of writing. 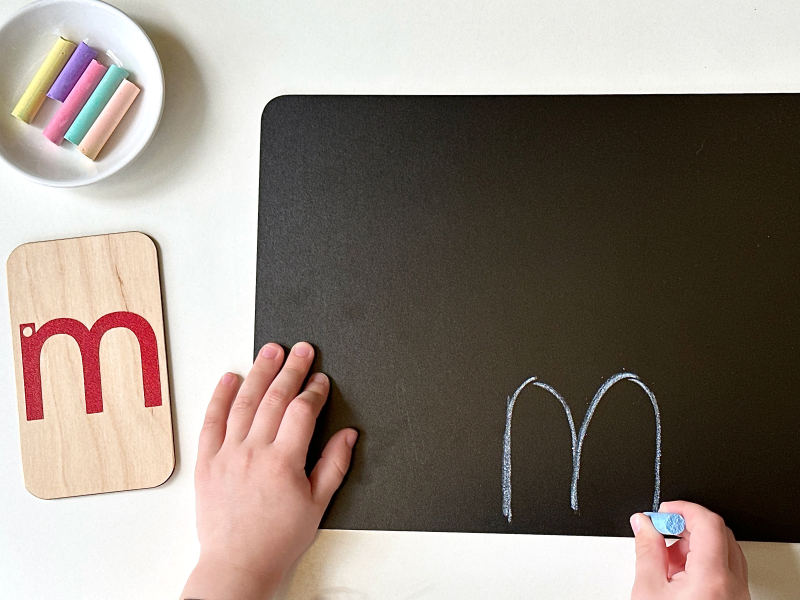 Chalk on a chalkboard. Not all children will enjoy or tolerate using chalk, it has a texture that many children are sensitive to. The benefit of using chalk is it requires a little pressure and can easily be erased, and the letters can be rewritten over and over again. 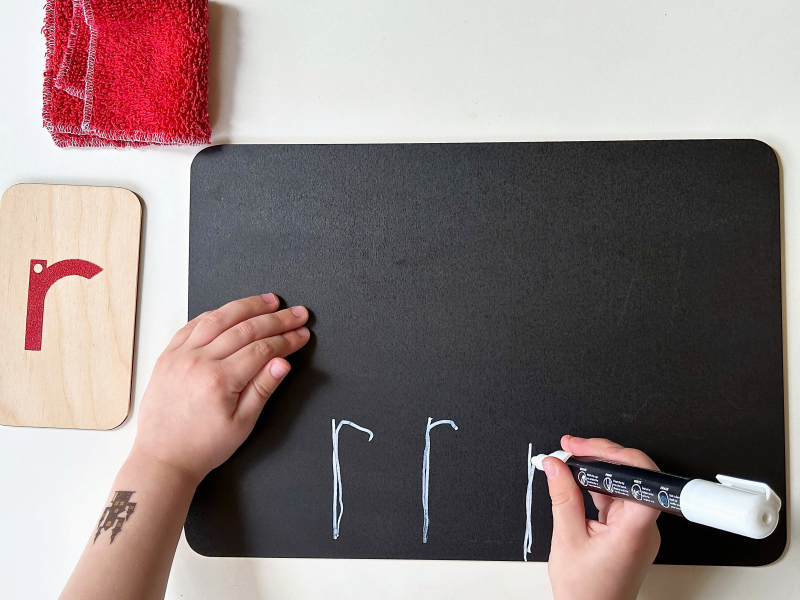 Using a chalk pen on a chalkboard. This is another example of wanting to mix things up a little. Otto LOVED using the chalk pen. I think it's the contrast that he liked the most, that the white really stands out, and it's easy to see where he has written. 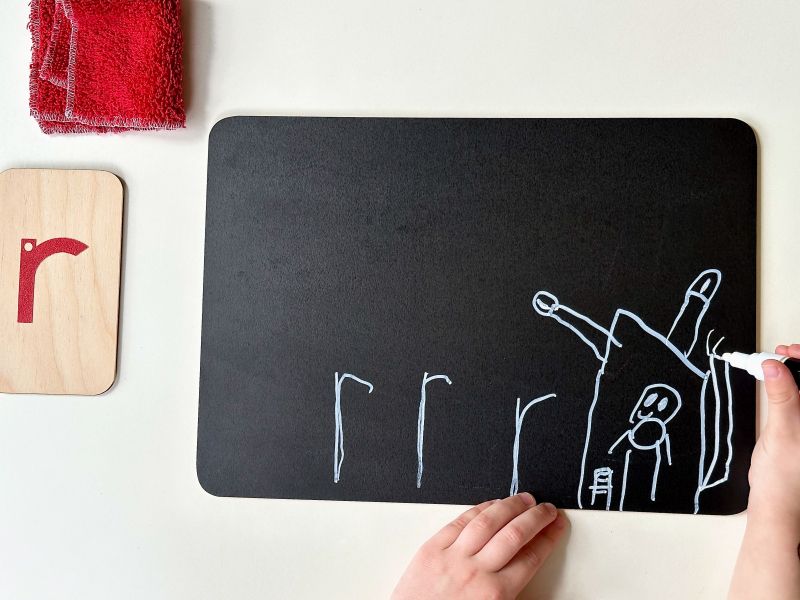 But he got a little distracted. I don't interrupt him, he doesn't want to practice writing; he just wants to draw. 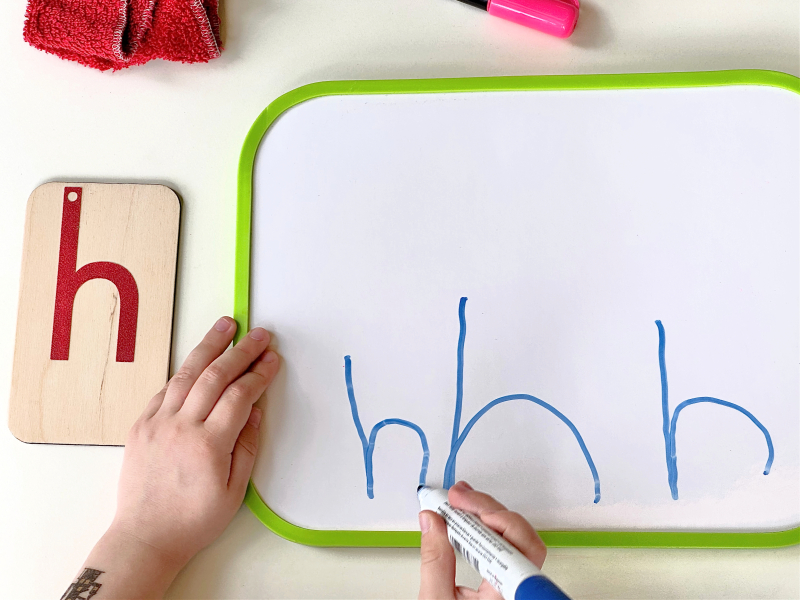 Using a dry-erase marker on a whiteboard. 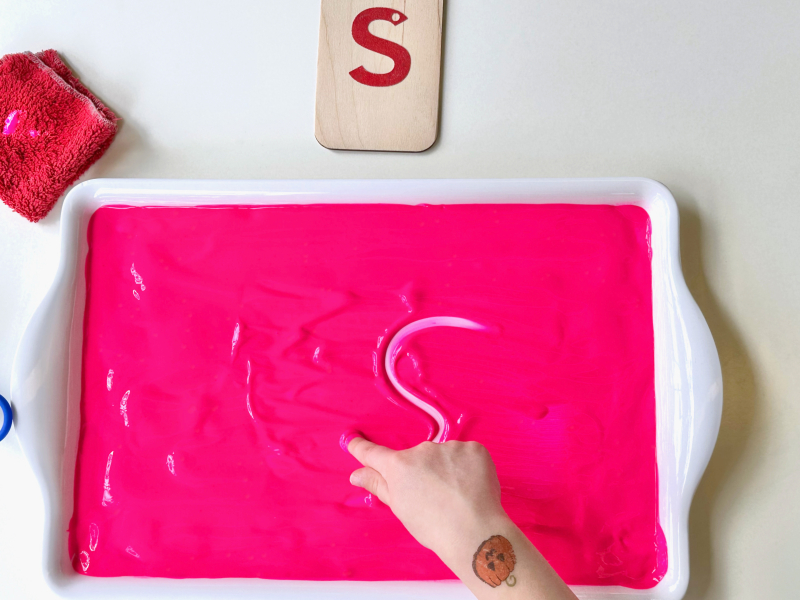 Finger painting. This is an idea from Montessori Read and Write. I keep a hand towel nearby for the child to wipe their hands and a foam roller for the child to smooth out the paint for them to re-write their letters.

Learning to write takes a lot of time and practice. Using different materials and surfaces keeps it interesting. I also find children like to have an option, they like to have an opinion on how they are going to practice their letters each day.

We could also draw the letters in the dirt, on flour before making bread, with crayons, pencils, markers or oil pastels on paper.